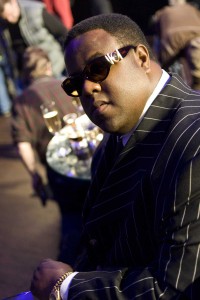 Christopher Wallace (1972-1997) did not have a chance to play himself in his own biopic, unlike 50 Cent in 2005’s “Get Rich or Die Tryin’.” Branded as Biggie, Biggie Smalls and Notorious B.I.G., Wallace did indeed die trying. The Brooklyn rapper only released two albums: “Ready to Die” and the posthumous “Life After Death.” Wallace’s 1994 song “Who Shot Ya” is here performed by Jamal Woolard, a lesser-known Brooklyn rapper (“I Know, I Know” and “Murder, Murder”) making his screen debut. Another first-timer is Wallace’s son Christopher playing his dad as a kid. In private school, black girls taunt him as “fat, black, ugly.” Inspired by his first encounter with his father, the boy pens his first verse: “You ain’t no pops to me/ You just some nigger sipping on tea.” Soon the honor student is packing a gun and peddling packets of white powder on the street. His first producer spells out a career choice: “You can be the average nigger from Brooklyn or you can rap about the average nigger from Brooklyn.” “Notorious” is produced by the rapper’s mother Voletta Wallace, and his managers Wayne Barrow and Mark Pitts, who are played by Angela Bassett, C. Malik Whitfield and Kevin Phillips, respectively. The filmmakers seem most interested in showing what a good son, dad and lover Wallace was. The film makes no inflated claims that Biggie was a big artist. In a missed opportunity, his verbal style at the mic is not channeled in the extensive voiceover scripted by Reggie Rock Bythewood and Cheo Hodari Coker, author of “Unbelievable: The Life, Death, and Afterlife of the Notorious B.I.G.” Director George Tillman, Jr. (“Soul Food,” “Men of Honor”) seems most at home when evoking the period vibe. As for the murder of Wallace’s rival Tupac Shakur (Anthony Mackie) and Wallace’s own murder, this is no “JFK” with a conspiracy theory about the hyped hostilities between East Coast and West Coast rap scenes. With Julia Pace Mitchell, Antonique Smith and Naturi Naughton. 122m. (Bill Stamets)