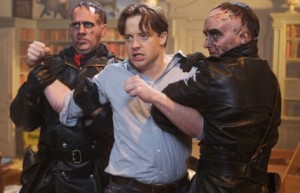 Booklovers of all sorts ought to like this fantasy based on—what else?—a 2004 book by Cornelia Funke. Nine years ago, Mortimer (Brendan Fraser, whose “Journey to the Center of the Earth” was triggered by a novel and a notebook) was reading aloud to his 3-year-old daughter. Turns out Mo, as everyone calls him, is a Silvertongue. That means when he reads a book, speaking the words can bring characters—as well as a dog named Toto and a Kansas cyclone if the book in hand is “The Wizard of Oz”—from the plot into reality. Metaphysical accounting dictates a balanced exchange: real people exit the real world and end up in the book when book people leave their world for ours. It’s like finding yourself in a film, reality TV show or a psychotic fugue. (“How did I get here?” as David Byrne and Truman Burbank inquired on other occasions.) Mo unknowingly exiled his wife Resa (Sienna Guillory) into the imaginary land invented in “Inkheart” by its author (Jim Broadbent). Bad guys from that book, led by Capricorn (Andy Serkis), now live in rural Italy in an old castle. 12-year-old Meggie (Eliza Hope Bennett) inherited her dad’s gift or curse. Her quick-witted first draft of a rewrite will save the day. Director Iain Softley (“Hackers,” “The Wings of the Dove”) and screenwriter David Lindsay-Abaire translate this grand adventure of bibliophilia and bibliophobia. Book-haters disheartened by the end credits naming nineteen translators of the original “Inkheart” can take heart that books likely burned in the book-burning scene, since no there’s no disclaimer that no actual books were harmed in the making of this motion picture. With Paul Bettany, Helen Mirren, Andy Serkis, Rafi Gavron and Jennifer Connelly. 106m. Widescreen. (Bill Stamets)