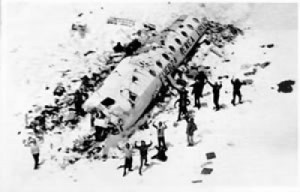 Cannibalism. There. I said it. A true-life tale, Gonzalo Arijon’s documentary “Stranded: I’ve Come From a Plane That Crashed in the Mountains” is preceded by two fictional versions, a 1970s Mexican exploitation film and “Alive” (1993), with Ethan Hawke. In October 1972, a Uruguayan plane crashed in the Andes. The passengers include a rugby team headed to a match in Chile. It’s primal material, and Arijon’s choice to accompany his reenactments with expeditions to take a group of the no-longer-young survivors (with some of their children) to revisit the site of the crash makes for stark, skillful tension. Gripping stuff. 113m. (Ray Pride)