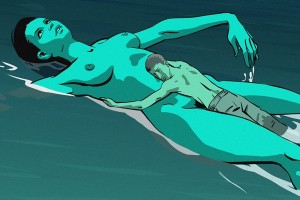 Ari Folman’s “Waltz With Bashir” hits me on so many levels, I can’t begin to unravel them all in a couple hundred words. An animated documentary made in its own idiosyncratic, lo-fi fashion, it makes for an unforgettable meditation on memory and young men sent to war. As an Israeli solder, Folman was among those dispatched to Lebanon as part of the June 1982 invasion. Like many of his friends, he’d suppressed the memories of events that led to a massacre in the town of Shattila. Working with art director David Polonsky, Folman uses present-day memories of his fellow soldiers (in all but two cases recorded by the figures in question) to weave a deeply troubling, dream-shaking story. It’s one of the singular experiences of the last moviegoing year, intense, and unfortunately, timely time and again. Folman told me in a recent conversation that he was more a “South Park” guy than a “Simpsons” man and that rude yet deceptively subversive sensibility is akin to his own. See it; you’ll be moved in unexpected ways. 81m. (Ray Pride)