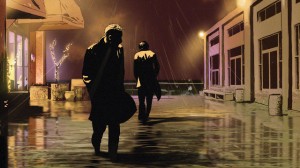 Images and moments from movies past sift through my mind all the time, and there are dozens from the past year that in spirited conversation would tumble forth at daunting speed. Still, the one movie that wells up again and again as I go through the day is Ari Folman’s Oscar-nominated animated film about memories of young soldiers recollecting in middle age what the Israeli Army did in the 1982 Lebanon war. I’ve seen it three times and it’s a mystery in plain sight. I have my ideas about why children empathize better with cartoon characters than human ones and why melodrama can sometimes demonstrate emotional truths better than naturalism. But “Waltz with Bashir”‘s grace, ease and simple brilliance comes from the form he chose to work in.

“If this film was shot by a DV camera and it was screened on a big screen, on a television, it doesn’t matter [because] the image in the end would be made out of pixels, out of dots and lines,” the bearded, elegantly dressed Folman tells me the morning after Blagojevich’s arrest, but before the film’s Oscar nomination for Best Foreign Language Film. Considering the question of how on earth such a thing as an “animated documentary” could exist, he continues, “It’s not the real me in your TV set, y’know. This image is made by beautiful drawings [by] very talented people. The voice is the same. The voiceover would be the same. So what is more real? The pixelized image with the dots or the drawing? I mean, who decides what is more ‘real’? I dunno. I don’t have an answer to that. I don’t think it makes a big difference. It’s a matter of taste.”

With the effortlessness Folman demonstrates in his transitions between time and space, I ask if he’d always been a moviegoer. “No, only in film school I started. I was 24. I was not interested. I didn’t have more than the average interest of a teenager before. But luckily enough, the history of film is short, and if you really want, you can complete all the essentials really quick.”

Similarly, Orhan Pamuk recently wrote that he thinks he’s read every book published in Turkish. “Really!” Folman says, impressed. He started as a child buying up all the crappy books, moldy novels, dusty cookbooks, in the used bookstores. He could do that because so few books had ever been published. The collective memory of cultural clashes that comes readily to him in his writing is from this experience. Which also seems to apply to “Waltz With Bashir.” It’s steeped in so many things, and it’s partly about reconciliation with yourself. “Yeah! Thank you.”

The subject shifts to an American parallel. There is the danger of unexpressed communal memories, when a society doesn’t speak of something, attempts not to think of it. There’s a clamor among some in this country, “’No, no, let’s forgive. Let’s forgive,'” I say. Folman shrugs. “It will take time. No one can deal with [the subject] of Iraq, the war. You can’t. It takes time. Those issues, I mean, they have to steam. It has to go through a process. I told my wife when we saw the elections in the U.S., I told her the images were as if America is just out of slavery. You know what I mean? People were so emotional; it was as if they were spared from slavery after thousands of years. I think that in situations like this in life, you remember the last shot of ‘Easy Rider’? There’s a shot and then there’s a crane rising above the motorcycles, above the road, it’s a helicopter shot. In seconds! I really like that. Simple. It goes like <i>wsssssh</i! Sometimes in life, it can be a relationship between a man and a woman; it can be what I did with myself in the army. Very quickly when you’re out of something, you’re so far away. You just don’t, you don’t, you don’t go through any process. I think maybe in a few months, the Bush era will look as if it was a hundred years ago, it will be incredible to even think about it.”

In the four-year production, Folman was productive. “I am a consistent writer. I write another thing. If I don’t direct, I just write. Mainly it’s a TV series that my wife produces. This way I feel obliged! I can’t run away. So I do it.” Folman was a writer on the original Israeli series remade by HBO as “In Treatment.” Two people in a room with lots of words? “Honestly, I got bored really quick. After you get the principle of two people in a room…. I need space. I need traveling in films. Just landscape. I need more. It’s not for me.”

Another advantage of Folman’s mix of animation techniques, composed over four years, is shared with shows like “The Simpsons.” You can go to the moon in cartoon form and not spend a billion dollars to go there or a million to recreate it. “Yeah, yeah, yeah. Right. I’m more of a ‘South Park’ collector than ‘Simpsons,’” Folman says. “‘South Park’? Incredible. Genius. Did you see the episode about ‘Indiana Jones’?”

Sirens crease the cold Michigan Avenue air outside. We grin.

“Waltz with Bashir” is now playing.