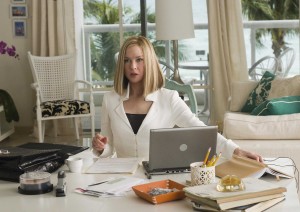 Lucy (Renée Zellweger) is a Miami exec dispatched to a plant in New Ulm, Minnesota to lay off half the workers and install robotic food processors and packagers for the rollout of a new power protein product called Rocket Bar. Ted (Harry Connick, Jr.) is the union representative for southeast Minnesota. Formula dictates everything that happens next in a script by Kenneth Rance and C. Jay Cox, despite the source of their set-up. Rance says he once met a woman from North Carolina at a bar who told him about her sojourn at a Minnesota food-processing plant. “New in Town” may hold no surprises in its plot and consoling sentiment, but there’s loving fun in detailing Minnesota’s working-class culture, as shot in Winnipeg. In his English-language feature debut, Danish director Jonas Elmer is scrupulous and kind in caricaturing warm folks in a cold place. Colloquialisms include all the terms for local bodies of water. “We drag Jesus into regular conversation,” notes Blanche (Siobhan Fallon Hogan), one of several strong supporting characters. Lucy and Ted transcend Marx and Engels, and Capraesque townsfolk triumph over corporate bottom-liners. Homespun customs, consumer taste for tapioca, and market forces make for win-win winsomeness. Look for Zappy-oca coming to a shelf near you. With J.K. Simmons, Frances Conroy, Ferron Guerreiro, Siobhan Fallon Hogan, Rashida Jones and Mike O’Brien. 96m. (Bill Stamets)