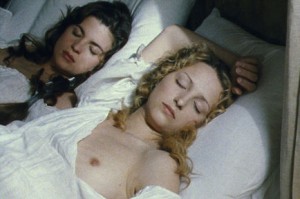 (Les amours d’Astrée et de Céladon, 2007) Eric Rohmer, who turns 89 in April, says that this will be his last film as director. He’s still mad for mad love: working from a seventeenth-century novel by one Honoré d’Urfé about fifth-century France, Rohmer’s final statement is filled with purple and foolish passages, but wins with its glorious embrace of the ideal of perfect love. Partially shot in bucolic, painterly tableaux and with an almost diffident approach to pacing, Rohmer’s film stop-starts for philosophical contemplation that underlines his essential conservative view of society. It’s not on the level of his six Moral Tales, but this “Romance” holds stalwart ideals. And, as to be expected of any young cast chosen by Rohmer, there’s prettiness that outshines the landscape. 109m. 35mm. (Ray Pride)