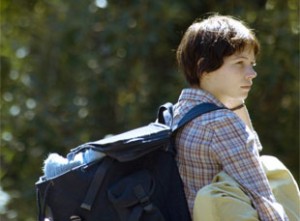 In Kelly Reichardt’s “Wendy and Lucy,” Michelle Williams continues to astonish with her quiet range in a too-timely story of contemporary working-class despair. What is acting? When I read the best reviewers of theater, I feel less than suited for the task of describing performance, but watching Kelly Reichardt’s “Wendy and Lucy,” with the very alive Williams at its dead center, I understand, you understand: a centeredness, a beingness, a simple, elegant, understated, yet stated presence. There is a magnificent poem by William Butler Yeats, “The Second Coming,” with the lines, “Things fall apart; the centre cannot hold; Mere anarchy is loosed upon the world…” Mere anarchy. That’s this moment, suspended in history. That is also this film: bad things are visited upon a good person. Mere anarchy. “Wendy and Lucy” is about a girl and her dog. She’s traveling the Pacific Northwest toward a hoped-for job. She loses her dog. She is disadvantaged and lightly abused in all the common ways. She wants work; she wants dignity. She wants the return of Lucy. The world hardly notices. She whistles an almost tuneless tune to keep her breath in the air, her life in the world (written for Williams, in an inspired stroke by Reichardt, by Will Oldham). So much better than her fine “Old Joy,” “Wendy and Lucy” defines Reichardt as a poet of the overlooked American working class. 80m. (Ray Pride)

“Wendy and Lucy” opens Friday at the Music Box.