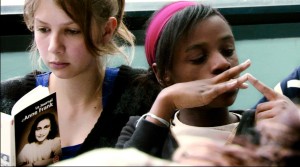 The original French title of Laurent Cantet’s richly observed, masterful “The Class,” “Entre les murs,” or “Between The Walls,” is philosophically just right, but didn’t sound right in English. But what happens in schools is seldom considered by outsiders beyond those walls, the oppressiveness felt by those within their confines, by adults who have escaped that confinement and moved on to thoughts caught between the walls of their own heads.

François (François Bégaudeau) is a teacher in a French high school, and at the onset of a new year, is filled with the optimism shared by his colleagues. But once the door to the classroom is closed, a microcosm of class and racial concerns inevitably bubble up from the collective teenagers. Bégaudeau had published a novel in 2005 about his experiences as a teacher and its similarities to a story that Cantet (whose earlier films include “Human Resources” and “Heading South”) wanted to tell, led to a collaboration that went so far as to place Bégaudeau in the film’s central role, as a teacher. It’s a fine extension of Cantet’s method, akin to Mike Leigh’s, of working material over with his collaborators and performers for an extended period before shooting. (In this case, almost a year of casting and rewriting and workshops with the eventual cast.) Working in digital video with a roomful of teenagers in twenty-minute takes offers an even more naturalistic effect, with the performers seldom aware of when one of the several cameras in the room might be on them.

At the risk of being banal, I venture to Cantet, the film succeeds in making the teacher human, rather than an idealist on a pedestal. The conflicts are plausible yet also gripping. “The book is a chronicle of a year in a class and what I needed to go on in my film was to have the flesh of the film. The way people work together, the documentary aspect of the film. I was preparing myself, going into classrooms, looking at the way teachers work and children work and in fact what the book proposed to me a point-of-view from the inside, because François has been a teacher for ten years. He knows that world. I really like in the film how François’ character is always trying to push the children to go a little bit further in their arguments. The way he is helping them to think and speak. That’s why I asked François to play his own role.”

Process is becoming more common in movies, observing how work is done: strong characters are a great special effect when you have little or no money. Is this observation of process, or even of class relations, I ask, something specific to his own way of portraying the world, or of something larger in cinema?

“I think my films are…” He works for the right word. “There is more and more a tendency for films to be more precise in their way of portraying the world, to look at the world more precisely. When you look at the selection in the Cannes Festival this year [where “The Class” won the Palme d’Or], there were so many films connected with reality. I think it’s perhaps a general tendency of world cinema. Just because the world in which we are living is more and more complex. More and more difficult to define. People really need to think about this and a film can help you to think… I think. I think, I think! Pardon me, I’m fatigued!”

As in any portrayal of a devoted teacher or physician, a sense of devotion lies beneath most scenes. Is “The Class” optimistic? Or pessimistic? “I think it is optimistic but it does see both sides.” There’s no false uplift. “As a spectator, I don’t like the film that takes me by the hand and tells me ‘Here’s what you have to think’ at the end of the film. I like to come out of the theater and ask, what did it tell me exactly and how can I think about this subject by myself, what questions did it ask me? When I do Q&As after my films, it’s obvious that people are not only talking about the film but of themselves through the film and that’s what I really like.”

The heroic identification is a constant in American movies. The superhero genre is paradigm and parody, oh I’m just like Superman or Batman. “I always try to make my heroes as human as possible and as complex as human beings. You can’t be a superhero when you have all the contradictions my characters have in themselves.”

Are you consciously working in opposition? “It’s really the only way I think I can make my films. It interests me to listen to what people have to say. It’s selfish, but I learn a lot of things making films. And on your other point, maybe it can be a reaction but it is not the starting point. But I am happy to realize I can make films in a different way and that my films can find a place in the cinema landscape. You are not obliged to obey to the dominant way of making and producing films. You can find your own way of working, which is another reason I was happy about winning at Cannes. It says, okay, you don’t have to conform to a model of what cinema should be. You can make this kind of experiment, the cinema is large enough to accept all these kinds of experiments.”