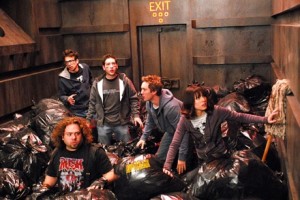 A vanload of pals since fifth grade drive halfway across the country in 1998 to break into the editing room of George Lucas’ Skywalker Ranch so they can sneak a preview of “Star Wars: Episode 1—The Phantom Menace.” One fanboy has cancer. Another is a girl. They battle Star Trek fans along the way. Director Kyle Newman and writers Adam F. Goldberg, Ernest Cline and Dan Pulick are at fault for this inane, inert road movie. In a self-incriminating instance of it-takes-one-to-make-one, these off-screen fans of “Star Wars” can only offer onscreen counterparts as nitwit nerds. In 1916, Hugo Munsterberg warned of moviegoing youth harmed by “the trivializing influence of a steady contact with things which are not worth knowing.” “Fanboys” only shows that distributors build shelves for good reasons. If only bad films like this would molder there longer. Wasting your time and theirs: Billy Dee Williams, Carrie Fisher, William Shatner, Seth Rogen, Kevin Smith and Jason Mewes. With Jay Baruchel, Dan Fogler, Sam Huntington, Chris Marquette and Kristen Bell. 90m. (Bill Stamets)