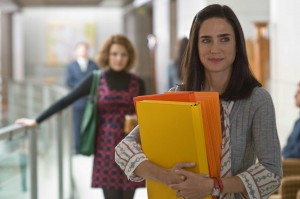 A line in a 2003 episode of the HBO series “Sex and the City” turned into the title of a 2004 self-help book that is now the title of a romantic comedy. “He’s just not that into you” is what every single straight woman needs to hear during her pointless, pathetic wait for a call or a commitment from that man she really ought to do without. “Sex and the City”‘s consultant Greg Behrendt and executive story editor Liz Tuccill co-wrote the book, and Abby Kohn and Marc Silverstein co-write the screenplay directed by Ken Kwapis (“Sisterhood of the Traveling Pants” and many episodes of “The Office,” “The Bernie Mac Show” and “Malcolm in the Middle”). Subtitled “The No-Excuses Truth to Understanding Guys,” the book runs through scenarios where its one-line mantra cues women to move on, and endlessly lies that all of you are lovely and sexy and likely to meet that super-fine guy you truly deserve. But no chasing: “men like to chase and you have to let us chase you.” Fortunately, this ensemble film is smarter than that about its 20- and 30-year-olds in Baltimore, despite traces of the book’s set-up of case studies and letters-to-dating-experts. Bar manager Alex (Justin Long from “Zack and Miri Make a Porno,” “Live Free or Die Hard”) dispenses shots of tough love—”If a guy is treating you like he doesn’t give a shit, he genuinely doesn’t give a shit”—to Gigi (Ginnifer Goodwin). Diverse relationships are interpreted by a likeable cast that includes Ben Affleck (“Jersey Girl, “Chasing Amy”), Jennifer Aniston (“The Break Up”), Drew Barrymore (“Music and Lyrics”), Scarlett Johansson (“Vicky Cristina Barcelona”) and Jennifer Connelly (“Reservation Road”). Connections between the coupled and the uncoupled are not played for cute. Insights on dating are deeper than the genre typically tenders. So is the film’s coy wisdom about happy endings. With Bradley Cooper, Kevin Connolly and Kris Kristofferson. 129m. Widescreen. (Bill Stamets)