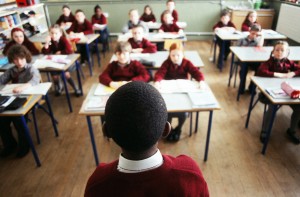 Shorts are made for many reasons, but like all leaps into the artistic-economic abyss, they’re made to be seen. Ask efficiency experts: the short snip of video on YouTube has become a predominant form of expression worldwide, both for the one with the camera and a daffy kitty-cat and for the one killing time at work (or at home on the dole). Yet the finely tuned short only rarely finds theatrical screen time, and usually only in the form of animation. A treat of a double feature starts this week at the Music Box, a package that’s been running several years now, of the Oscar-nominated shorts in two of the Academy’s three categories, animated and live action (documentaries aren’t included). Both packages are good this year; the animated selection has several shorts added to produce a ninety-minute running time. Selections from Russia, Japan, France and the UK bear the same hallmark: exceptional creations of a stylized world and a narrative of just the right length. (Pixar’s “Presto,” which preceded “Wall-E,” is the fifth entry.) But the live-action shorts are even more of a piece, with lovingly composed, stylized views of the real world, especially Steph Green’s “New Boy,” adapting a Roddy Doyle story about an African emigrant’s first day in an Irish school. So much talent in such small packages… (Animation, 90m; Live-action, 120m.) (Ray Pride)