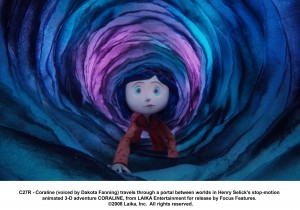 Simple wonderment is so rare that you can forgive an adventure like “Coraline” its oddities and hiccups: slightly dark and definitely dazzling, Henry Selick’s fourth feature is a grab-bag of visual delights. Based on a novel by Neil Gaiman, Coraline is a bratty 11-year-old with the voice of Dakota Fanning, whose conflicts with her parents lead to a rich and troubling fantasy life. The mix of stop-motion and digital design isn’t consistent, but the expressiveness is Coraline’s features is consistently mesmerizing. “The Nightmare Before Christmas” may be more fully realized, but there are exquisitely dark things in store in “Coraline.” Selick and Gaiman understand how a child’s imagination relies on the bad to define the good. Grown-ups won’t be disappointed. Kids will be terrified. See it in 3-D if you can. (Ray Pride)