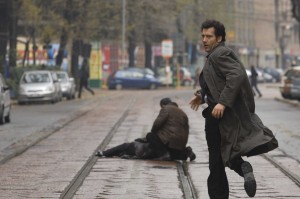 “The Generic” might have made a more honest title.

Tom Tykwer’s seventh feature, “The International” boasts Clive Owen, a conspiracy, guns, European locations, guns and a shootout in the Frank Lloyd Wright-designed rotunda of Manhattan’s Guggenheim Museum, and it plods along for what seems an interminable 122 minutes. I admire most of what Tykwer (Tik-ver) has done. His “Faubourg Saint-Denis” is the best part of “Paris je t’aime,” and even from his second feature, the thrillingly glacial “Wintersleepers,” he seemed like a Teutonic Spielberg, lacking humor but sharing an advanced sense of spatial possibilities in camera placement and movement, framing and dynamic editing. “Run Lola Run” was the bubblegum apotheosis of those skills.

After the big-budget period “Perfume: The Story of a Murderer,” how to bring the German director back into the modern world? A post-“Bourne” thriller with Clive Owen? Sounds like a perfect product. Bankers as bad guys, with Byzantine schemes for world domination? Timely! But in almost every way, “The International” is dreary pablum. Tykwer is many things, but not an accomplished paranoiac, and suspense is hard to sustain when characters drape every other scene in beige-tinted bolts of unconvincing lingo. What would an Alan Pakula do with a tale like this, of Interpol agents and sleekly tailored technocrats doing battle over weapon sales and minuscule clues that hardly make sense? He tried: His idea of a happy end to his 1981 “Rollover” was a total meltdown of the world economic order.

Peopled by a multinational cast of well-dressed men who seem only to exist in rooms with vast windows open to empty skies as opposed to failed creators of credit default swaps toiling under stained drop ceilings, “The International”‘s farrago of defeatist fact-foraging at its most nearly comprehensible seems like a bastardized version of Naomi Klein’s alarming conclusion in “The Shock Doctrine,” that modern economics is a matter of the powerful cleaning up on conflict and disaster. Oh! Here’s a line: “You control the debt, you control everything.” Leave the world as “slaves to debt.” Got it.

For legal reasons, the names of movie characters are often banal or absurd, but the names in Eric Singer’s screenplay are a mix of silly and pretentious. Owen is Louis (“Louie”) Salinger; Naomi Watts is Eleanor Whitman; Armin Mueller-Stahl as a guilt-ridden fixer, Wilhelm Wexler. And where do you get a name like the one of industrialist Umberto Calvini? It’s unfortunate that it sounds like a tortured way to nod both to Umberto Eco and Italo Calvino. The nested narratives of the late Calvino sing while Singer’s script can hardly clear its throat with lines like “For Chrissakes, you’re not at the Yard anymore!” (Owen does don eyewear that suggests the kind of Italian refinement that on non-Italians is usually taken for simple arrogance.)

The visual palette is blah, burnished yet clement, neither gloom nor gleam. All cities under their own overcast, a dull, uniform gunmetal sheen that cries out for more gut and rot. The score, written by Tykwer and his usual collaborators Johnny Klimek and Reinhold Heil, often substitutes simple tinnitus for the sardonic tattoo of the best passages of their earlier compositions.

Long scenes with characters against simple backgrounds cashing in chit-chats are suggestive of multiple reshoots. The best passage of “The Princess and the Warrior” and “Run Lola Run” show Tykwer’s chill, dynamic knack, which is muffled here, the cross-cutting, patterning and propulsion of earlier work lost to rafts of gab. There are hints, such as aerial and overhead views of a plaza in Milan coursing with diverging, merging masses of small dark human figures against a white stone surface. A foot chase finds Owen confronting a stopped phalanx of traffic, black cars reaching for blocks, a cool construction that makes one wish for a latter-day Hitchcock, or even a post-millennial “American Friend.” The climactic shootout has several bits that count as shoutouts to Sam Fuller’s ideas about action, including using another man as a shield against gunfire, but the neatest touch is incidental. On his way to his hail of bullets, Louis in midtown Manhattan, crossing the street at 47th and Park Avenue, and wherever the camera is placed or pans, there are signs for banks, there are Brinks trucks, there’s a Chase logo, there, Citibank, Chase again, Chase everywhere, the branded carrion of the vulture’s hour of now.