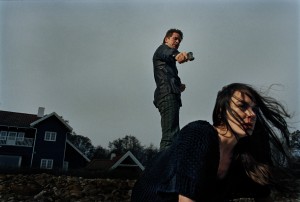 The boundary between craft and crap can be fine: what one mind finds genially garish and gratifying gaudy, another will scent as trash from the get-go.

When Ole Bornedal’s “Just Another Love Story” (Kaerlighed pa film) debuted at Sundance 2008, it didn’t sound like something worth seeing while there, a Danish programmer at best. In a way, I’m glad I waited. Seeing it outside of a festival’s deadlines and overload, it stands out as beautifully crafted, vibrant, visceral horror-noir, a dangerously fragrant story of a man who witnesses death for a living and takes a treacherous leap into dreams of other lives.

Writer-director Bornedal opens with three brief, cryptic “love scenes,” each ominous in dark fashion, and moves quickly into the main story. Jonas (Anders W. Berthelsen) is a family man, a forensic photographer with an airless suburban life. One day, there’s a car crash, he’s at fault, leaving a young woman, Julia (Rebecka Hemse), in a coma. Visiting her in the hospital, Julia’s family takes him for a boyfriend she’d met in Hanoi whom they’ve never seen. Why not play the role? Life’s not that interesting. Why not descend into fantasy? Wife and friends react badly to misleading clues and cues: “Fuck feelings! Make up your mind!” a colleague tells him over a corpse in a morgue. But he can’t. The femme fatale he nearly killed transfixes him. And won’t the boyfriend show up with complications galore? So many complications it would spoil the fun to unravel them here.

One of 2008’s five highest-grossing films in Denmark, “Just” sounds in outline a lot like 1995’s Sandra Bullock-Bill Pullman-Peter Gallagher romantic roundelay “While You Were Sleeping.” (Another one of the things that made me initially reluctant to go.) But Bornedal’s interest lies less in plot (and emotion) than in sweeping, almost grandiloquent visual strokes, pulpy plot turns and fleet, assured editing between parallel perspectives and time frames. Busier but just as eerie as his 1994 film “Nightwatch” (which he remade in English in the U.S. in 1997 from a script co-written by Steven Soderbergh), “Just Another Love Story” is filled with dark pleasures, the kind of eye-filling treat that makes your eyelids tired from how many times they go wide.

While far more of a garish thriller than any work from Atom Egoyan, the interest in splintered time schemes parallels the Canadian director’s work, and the rich color schemes are as stylized as those of “Exotica” and “The Sweet Hereafter.” Letters and narration suggest the twining strands of a literary thriller. But Bornedal isn’t really an intellectual, compared to the ever-patterning Egoyan, and settles mostly for simple fun. Like last year’s surprise arthouse hit, the $6 million-grossing “Tell No One,” “Just Another Love Story” doesn’t shy away from adult fears and grown-up moments. Convolutions spiral, passions erupt into violence.

Asian film has gone through its phases (“J-Horror,” “K-Horror”) and “Grudge” and “Ring” remakes have come half-digested through the Hollywood studio python to finally decadent extremes. Many of the elements don’t transpose neatly from Asian cultures to the American one. Our legends are different. Grown-up passions that result in violence, revenge and retribution? Familiar enough to work on any turf.

In the past few years, along with a few samples from Spain like “Timecrimes” and “[REC],” the chilly reaches above Europe seem a new hope for waking nightmares, ranging from the bleak pleasures of Baltasar Kormakur’s Iceland-specific genetic shocker-murder mystery “Jar City” to the pre-teen vampires in Tomas Alfredson’s Swedish coming-of-age story, the gently poetic, fiercely quiet “Let The Right One In.” Bornedal fixes on sight, loss of sight and recurring memory. As of the first Scandinavian features to revel in the sustained possibilities of CGI, the results are suitably delirious; lurid, even. Fantastic images abound, such as a sustained scene of the effects of a tremendous car wreck: glass, snow, a woman’s shoulder-length brown hair, wind, the pull of gravity. There are skies, especially at water’s edge, that would give the painter J. M. W. Turner pause. Another scene: diamonds in rain spill like shatters of glass, like blood from a shooting victim. Richly planned and designed, the shot, like “Just Another Love Story,” is as cold as the human heart.

“Just Another Love Story” opens Friday at the Music Box.