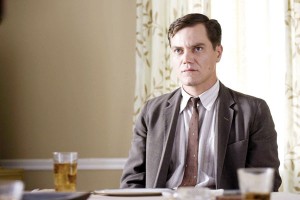 Funny story about Michael Shannon. I was anxious to see William Friedkin’s film adaptation of Tracy Letts’ “Bug,” starring Shannon (who had originated the role on stage) and Ashley Judd, so I got out to the movie theater the first week of its release. His searing, terrifying performance warped my vulnerable brain—Shannon’s entire presence scared the hell out of me, so much so I had trouble sleeping, images of his blood-soaked body, surrounded by flames, his mouth rambling chaotic theory, had me turning over and over again.

The next day, I’m driving to work, happy the sun’s out and shining, drowsy from lack of rest. I’m stopped at the Clybourn and North intersection, first in line, and who do I see walking across the street, directly in front of my car? Shannon of course. Terror all over again. At the time I could’ve sworn he was in the middle of an insane conversation with himself, but I’m sure my mind was playing tricks on me. We make eye contact—one look at me and he picks up his pace, probably stunned by my floor-dwelling jaw.

Shannon, now Oscar-nominated for his scene-stealing supporting role in “Revolutionary Road,” got his start here in Chicago in 1993 with A Red Orchid Theatre, of which he still serves as an ensemble member. He’s also graced the Lookingglass and Steppenwolf stages—his partner is Steppenwolf ensemble member Kate Arrington, the two have a daughter—with roles in the aforementioned “Bug,” plus Letts’ “Killer Joe” and “Man From Nebraska.” On screen, he’s had prominent roles in films like “8 Mile” and Oliver Stone’s “World Trade Center,” but none as powerful as that of John Givings in “Road,” the troubled mathematician whose commentary on the young Wheelers glows—and bites—with its honesty.

Now living in New York, Shannon’s recovering from a tumultuous last few months and, of course, getting ready for Sunday. “Well, it was pretty crazy for a while, but it kind of settles down when the voting period is over,” he says. “No more campaigning to be done, so you just get a week or two to relax back at home, hang with family. I’m trying to catch up with friends.”

He says the Oscar-campaigning process was rather extensive. “Oh yeah, the whole deal is very, very extensive. They call you up and they say, ‘You know, we think we want you to get nominated for an award,’ and you’re like, ‘Wow, that’s really exciting, I can’t believe how lucky I am.’ And then they’re like, ‘Well, you’re gonna have to do a couple things, go to some functions and stuff.’ It’s really like running for office.”

But it wasn’t all that bad. “It’s not that I didn’t enjoy it,” Shannon says. “It’s something you can’t understand unless it happens. I used to hear people complain about things like this, and it would irritate me, I would think they were ungrateful. It’s not that I’m not grateful, I’m extremely grateful, but it’s something you can’t fathom unless you’re doing it. Parts of it I really love, like doing Q&As after screenings, hearing what people think about the movie. It’s a rare experience.”

Shannon says that as a young actor coming up in Chicago, he never imagined he would get to this point. “I just did an interview with the Italian Vogue…and this woman, she was Italian, and had a very thick accent, and she asks, ‘You know, I did a lot of research on you, I read some of your reviews from when you started in Chicago, and all the critics, they said you weren’t very good. So I’m wondering, how did you get better?’ And I’m like, ‘Wow, I don’t know how to answer that.’ I guess it’s a long journey. I don’t think I ever thought about it—I never thought I was gonna leave Chicago. I never wanted to leave Chicago. I wasn’t one of these people who wanted to move to LA or New York and get famous. I just liked doing plays.”

He says he learned some valuable lessons here as well. “Well, I think it’s pretty hard to escape humility in Chicago. It’s kind of drilled into you, being humble, and always no matter what trying to get better and never settling where you’re at or resting on your laurels. And also that—I don’t know if I learned this in Chicago or what—but the story is the most important thing. Actors, it’s kind of an ironic thing, we’re all seen as arrogant and vain and self-centered people, or that’s one commonly held perception, but it’s really a service industry. You’re serving the writer and the director. I feel like that’s something I’ve learned.”

Shannon says he’s looking forward to more time spent in Chicago during the next theater season, as Arrington’s hitting the stage in two upcoming shows, and he might be “doing some shows” himself. And he has plans—next week, in fact— to make it here to see AROT’s new production of “The Unseen.”

“I’m a creature of habit, I go places I used to go,” he says of when he visits Chicago these days. “I like to go to Old Town, I feel like that’s my neighborhood. I used to live around there. I go to the Old Town Ale House—I got a pretty good chance of seeing who I want to see if I sit there long enough… I just love the whole city. I miss it.”