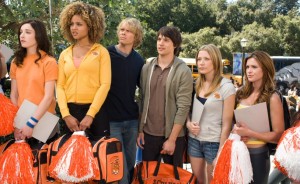 Two vapid boys on a football squad try to score with vacuous girls on cheerleader squads. The duo from Gerald R. Ford High School in Hinsdale, Illinois takes a detour from summer football camp to a summer cheerleader camp at Southeast Illinois State. Shawn (Nicholas D’Agosto) and Nick (Eric Christian Olsen) are not vehicles for commentary on vacant teens. Nor does this comedy parse tomcat versus horndog. Based on a high-school experience of producer Matthew Gross at a Santa Barbara cheerleader camp, the screenplay is by Freedom Jones, who appears to have no experiences of his own. (No one at Screen Gems wrote a bio for her or him in the film’s press kit.) Director Will Gluck brings no moves of note in a plot topped with a risky routine called The Fountain of Troy. The wittiest bit in “Fired Up!” only spins another cheerleader film: clone-like campers mouth all the dialogue of “Bring It On” during an outdoor screening. Runner-up for unoriginality: working the product placement of Staples into the plot wherein a character arranges the office supplier to sponsor logo-bearing outfits for the Tigers. The dialogue is Southern California TV teenspeak, an argot that sounds like suburban baby talk. With Carly Molly Sims, Danneel Harris, Adhir Kalyan, AnnaLynne McCord, John Michael Higgins, Philip Baker Hall, Margo Harshman, Hayley Marie Norman and Juliette Goglia. 94m. (Bill Stamets)