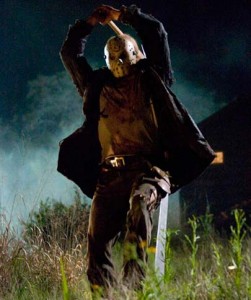 In a smart set-up, Marcus Nispel’s start-from-scratch remake of “Friday the 13th” opens with a group of friends on a modern-day treasure hunt to find a supposed crop of “killer weed” in the woods. Armed with GPS, camping gear and enough booze to make it worth the hassle, they wander the woods of Crystal Lake before setting up camp for the night. (Nispel directed the recent glossed-up remake of “Texas Chainsaw Massacre.”) The only riff on the original “Friday the 13th” movies comes as a campfire story of a crazed mother taking revenge on a group of unlucky counselors before being taken down by the sole survivor. This Michael Bay production also replaces normal-looking girls with big hair and grannie-panties with stick figures with boob jobs. Our present-day couples split off, one bunch stumbling upon the old Crystal Lake campsite. Nearby is a seemingly abandoned house where time seems to have frozen decades ago. In one bedroom the curtain flutters to reveal a name etched on the headboard. Simply put, it doesn’t take long for these kids to become one of the many who disappear in the woods. Six weeks later, Clay Miller (Jared Padalecki) is searching for his lost sister Whitney (Amanda Righetti), much to the dismay of the local population and police force. Running into Trent (Travis Van Winkle) and his group of friends, heading to his father’s cabin for a weekend of sex, booze and topless waterskiing, leads to sympathetic Jenna (Danielle Panabaker) assisting Clay in his search. By the time night falls, Jason is again out for the slaughter, seeming only to rise to the occasion for bloodletting when a band of horny teenagers comes into town or when someone stumbles upon that stash in the woods. Judging by the handprint bruises I left on my boyfriend’s arm, Jason will linger by Crystal Lake for a long time. (Julie Gavlak)