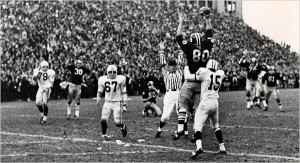 Filmmaker Kevin Rafferty (“Atomic Café”) takes unlikely material (for sports non-aficionados) and transforms it into giddy fun in the documentary, “Harvard Beats Yale 29-29.” When the two football teams faced off in 1968, undefeated for the first time since 1909, fifty young men played out what became a college football classic. It’s the figures that make it more than just suspenseful, with a Yale captain who was already the “B.D.” character in Garry Trudeau’s “Doonesbury,” and a Harvard lineman named Tommy Lee Jones. It’s a thriller, it’s funny, and could well be one of the best sports movies ever made. 105m. (Ray Pride)