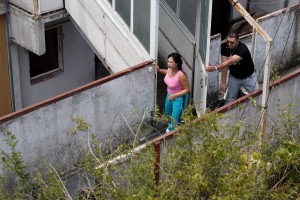 Matteo Garrone’s hellishly coruscating crime fiction “Gomorrah” was passed over for Oscar’s best foreign language nominees, and its omission was as disappointing as the eventual winner of the award. (That and the dismissal of “Waltz With Bashir” may be the best of compliments.) Yet it’s important to remember: the movie still stands tall. Its telling of the behavior of the Neapolitan mafia, based on a bestselling nonfiction book the author of which, Roberto Saviano, remains in hiding, is searing and fierce and unapologetic. Telling the stories of six figures in the Camorra, or Neapolitan mafia, that commits its crimes in the area around Naples, Scampia, Castelvolturno and Terzigno. Lovely names and terrible deeds. Garrone’s style is more tableau than tabloid; his horizontal frames are spare and the pacing fleet and not a gram of romance touches the screen. Smuggling and trafficking and garbage are a big part of the activities of the gangsters and the idea of disposability, the inevitability of the dispatch of disposable human garbage wafts throughout. There’s a moment involving a tailor whose work winds up draping a Hollywood star that’s is as trenchant as the blasts of sudden, senseless violence that pepper the film. Garbage in, reserved art out. The facts in the closing titles chill the blood. 137m. Widescreen. (Ray Pride)