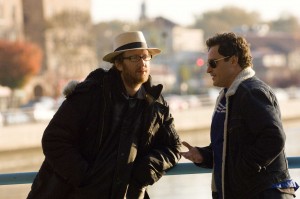 James Gray’s fourth feature, “Two Lovers,” is a tender, odd duck. In a delightfully complex performance, Joaquin Phoenix plays Leonard, whose ongoing instability leads him to move back into his parents’ apartment in the Brighton Beach area of Brooklyn. (As his mother, Isabella Rossellini has some of the choicest reaction shots of the movie year so far.) Needing both medication and meditation, Leonard still manages to meet two intriguing women almost immediately, a new neighbor, the flighty Michelle (Gwyneth Paltrow), and Sandra (Vinessa Shaw), the apparently stable daughter of a businessman who wants to buy his family’s dry-cleaning business and bring him into the fold. With excursions into mild absurdity at times, Gray still brings depths out of his three central characters. (As a wealthy married man Michelle is seeing on the side, Elias Koteas also captures something of the confidence of privilege that approaches classical arrogance.) Sandra’s goodness, Michelle’s past-30 emotional tremulousness and fear, Leonard’s abashedness at the good fortune that is also the terror of potential commitment or potential emotional pyromania. The opening scene finds Leonard neatly putting dry-cleaning in its sheer, clear sheath on a bridge railing before jumping into a bay, a comically inept suicide attempt. Bookended with the final scene, simultaneously comforting and frightening, like commitment itself, it shows some of the eccentric tonalities of Gray’s writing and direction; comic, wry, behaviorally observant yet also willing to tumble into unbearable love. At a Chicago International Film Festival showing, Gray spoke afterwards until the last question was asked, essentially a monologue of an hour or so and then we talked another hour afterwards (longer than the running time of the film). Gray’s confidence is indefatigable, as well as his ability to tell a story in a single run-on sentence that spins for minutes on end. Self-regarding, self-deprecating and given to very bad put-on voices, the garrulous man stands in engaging contrast to the asperity of the best moments in his work. Maybe it takes a loudmouth to appreciate the quieter parts of life. Widescreen. 108m. (Ray Pride)