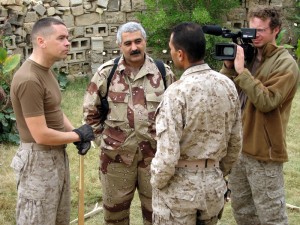 “I am not a soldier, my two brothers are,” narrates director Jake Rademacher in his first-person essay on brotherhood in wartime. “What I wanted to do in my twenties was denied me,” notes this West Point reject. “I always wanted to go to war. I wanted to see it.” So he goes to Iraq as an embed to visit his younger brothers: Capt. Isaac Rademacher, a West Point grad and U.S. Army Company Commander, and Sgt. Joseph Rademacher, an Army Ranger and sniper who likes the “fun stuff” like “kicking down the door.” Like a kid, Jake finds it cool when the pilot of the military transport lets him come up to the cockpit to watch landing in Mosul. “I was determined to cram as much combat experience as I could in five months,” says Rademacher. Although his credits include Chicago stage roles and voicing the Budweiser All American Ale, he ably reports on diverse theaters of operation: recon missions on the Iraq-Syrian border, sniper duty in Sunni Triangle and marketplaces in Kurdistan. But besides “team insertions” and “presence patrols,” there’s the recurring preoccupation with sibling solidarity. “I’ll never be hard enough for Joe,” he admits. “It’ll be cool to see what snipers do. At least it will shut Joe up.” “Brothers at War” reveals what it’s like to be in combat and what it’s like to be a brother. Deep as these issues may be, Rademacher makes a huge mistake by wrapping his debut documentary in the shallow, manipulative music by Lee Holdridge. With Dennis, Nikki, Claus, Jane, Hannah and Jenny Rademacher; and SSgt. Edward Allier, Cpl. Frank McCann and Sgt. Ben Fischer. 110m. (Bill Stamets)