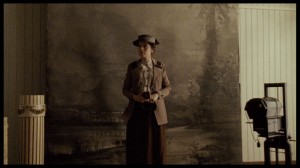 Starting in 1907, Jan Troell’s tender epic about the transformation of a woman’s life after the discovery of a camera, “Everlasting Moments” crosses several decades of her life with an abusive alcoholic husband and several children (including the film’s narrator) and the modest peace she finds as a naturally gifted amateur photographer. The hardships of the early part of the twentieth century in Sweden are sketched deftly, as well as the public face of stern morality in isolated Sweden before World War II. Troell captures emotional instants in telling shards: her husband, at the docks, tempted with the promise of a swig in a swirl of falling fluffy snow; a streetcar emerging as a golden blue from the indistinctness of a storm; a lit linen backdrop in a studio behind a girl in layers of cotton glowing like luminous sails of a ship; a heart-stopping evocation of a camera obscura as a helpful photography store owner who fancies her casts the shadow of a moth across her wedded palm and her smile that follows. Thematically, the character’s portraits of her family evoke work like Sally Mann (as well as a sublime scene about photographing a dead girl after her disappearance into mist atop a frozen, but not wholly frozen, sea) and the level yet falling light of Vermeer, but Troell’s observant eye makes for one of the most captivating films about fortitude and innate talent in memory, as well as the quotidian banality of sublime sunlight. Troell, working as co-cinematographer, also dashes in splendid allusions, from interiors arrayed to resemble the work of seventeenth-century Dutch genre painters like van Ostade, Hals and Molenaer to a scene of a man and woman waltzing giddily along a waterfront, composed to evoke Vermeer’s rare landscape, “View of Delft.” And the scene of the shadow of a zeppelin occluding the light across a medieval courtyard? Sheer science fiction, the modern age ominously darkening village life. It’s a gorgeous, often heartbreaking picture. (Ray Pride)