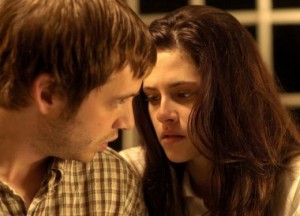 A likeably overstuffed directorial debut from actress Mary Stuart Masterson, “The Cake Eaters” traces the fissures in the lives of two families in an upstate New York village. She’s got a gentle touch, with smart, understated performances coming from Aaron Stanford, Bruce Dern and Elizabeth Ashley that mask the theatrical style of Jayce Bartok’s screenplay. The center, however, is a blazing performance by Kristen Stewart as a teenager with not long to live. When Stanford’s sleepy character meets hers, the story sparks. The evocation of hamlet life feels true rather than romantically rustic, and the aspects of how illness and death are treated in small towns are strong as well. But Stewart… she not only proves she’s an actress, but an incredibly talented one as well. Think the fury of her small role of “Into The Wild” and multiply hundredfold. With Thomas Cavanagh, Jesse L. Martin, Talia Balsam, Andrea Martin, Melissa Leo, Elizabeth Ashley, Miriam Shor. 95m. DigiBeta. (Ray Pride)