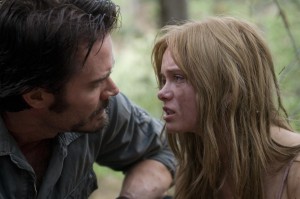 As the title appeared on the screen, applause arose at Monday night’s River East preview screening. No one booed at the end. Fans of the 1972 original by Wes Craven may relish this redux of this rape-stab-shoot-drown-maim-electrocute shocker. The budget is bigger for this remake, shot in South Africa, but the transgressive degree of gore is no longer evident. “We were all very anti-establishment at that time,” recalls Craven. This “Last” goes nowhere new. (See “Funny Games” for a more cynical, creative use of upper-middle class lake houses with vicious visitors; or see David DeFalco’s “Chaos” for authentic exploitation fare.) Once again, two teens, baited with marijuana, are violated by a band of sociopaths on the run. That evening the violators find refuge in the isolated house owned by the parents of one girl. A telltale item of jewelry tips off the hosts to the horror. They exact righteous grisly retribution. No need of law enforcement. Dennis Iliadis directs a screenplay variously attributed to Carl Ellsworth, Aleka Laskou and Adam Alleca. With Sara Paxton, Tony Goldwyn, Monica Potter, Sara Paxton, Garret Dillahunt, Martha MacIssac and Riki Lindhome. 109m. (Bill Stamets)