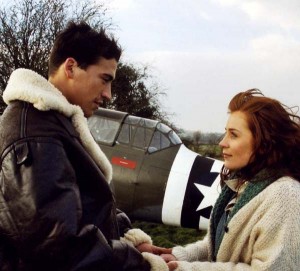 A director of British TV since 1972, Roger Tucker makes his feature debut with a cliché-packed script by Chuck Conaway that’s a chore to endure. In “Waiting for Dublin,” Andrew Keegan, acting like a stand-in for Brendan Fraser, plays Mike. Drunk in Chicago on New Year’s Eve, this rookie flyboy welcomes 1945 with a $10,000 bet he will shoot down five Axis aircraft. We skip over his first four German hits and see him crash land on the Irish coast. Cue a village of colorful Irish caricatures. Mike tries to bed the local lass Maggie (Jade Yourell) and tries to get German defector Otto (Jenne Decleir) to let him shoot down his Messerschmidt so he can tally a fifth hit and win the bet with the Chicago bookie, who is a nephew of Al Capone. Meanwhile, a Gestapo hit man (Guido De Craene) makes his way to the village to kill Otto. This lackluster comedy only surprises with its consistent unoriginality. It is only notable for noisy sound design that overuses off-camera songbirds, sea gulls, roosters, dogs and cows to lend rural color to the aural mis-en-scene. With Hugh O’Conor, Frank Kelley and David Wilmot. 83m. (Bill Stamets)