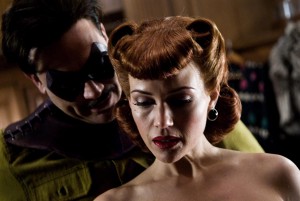 Warner’s advertising for “Watchmen” refers to director Zack Snyder (“Night of the Living Dead,” “300”) as “visionary,” a word we’ll define here as “one who uses intricately colored and designed cartoon panels that explore the outer limits of its form in lieu of storyboards.” Serialized by DC Comics in 1986-87 and collected into what’s become one of the most respected of graphic novels, “Watchmen,” written by Alan Moore and drawn by Dave Gibbons, offers an alternative world, one in which Nixon is a no-terms-limit dictator and nuclear annihilation is imminent. Masked superheroes are banned. Violence fills the streets. In 1985, years after their involuntary retirement, someone is killing the superheroes. Many dark themes are explored with a high degree of pessimism about the human condition.

The adaptation’s slavish devotion to Gibbons’ panels is curious: the best adaptation, one more “faithless” than faithful, would seem to be one that explored and exploded the conventions of film grammar more than replicating the source material. The result is a killing lack of suspense, rage or fear. Moore’s dialogue is often cut-and-pasted into the script instead of reshaped for the ear, but his sardonic near-nihilism comes through in isolated lines with gratifying bile. The story limps when it should rocket, ambles when it should rock. It’s boring as filmmaking, even with bits of production-design flash and filigree in most every frame.

There’s an elevation of the level of sadism in a couple of violent encounters. In a murky palette ranging largely from rain blue to gunmetal gray, some colors are toned down: the substantial bursts of grue, of blood-slick viscera that winds up on walls, floors, and in one case, a pressed-tin ceiling, is a slick of gray-black-wine red splatter.

Most reviewers have made ample note of Dr. Manhattan’s outsized blue willie that’s brought out for ample passages of schlong-and-dance. Interestingly, as Snyder demonstrated abundantly with “300,” he’s comfortable with wallpapering his movies with homoerotic content to a target audience that will likely be largely adolescent and post-adolescent males. Snyder finds ample ways to photograph Patrick Wilson’s thrusting buttocks during a couple of embarrassingly shot sex scenes. While I like Wilson in “Hard Candy” and “Little Children,” in “Watchmen” most of his acting is done with his ass, even with his pants on. Snyder’s camera likes Wilson’s bottom.

Jackie Earle Haley is the movie’s dark pearl. Unmasked, Haley’s performance lacks the actorly vanity-of-no-vanity and goes straight for the goods. Under the Rorschach mask, his guttural growling of narration along the lines of calling Manhattan “an abattoir of retarded children” or a “city dying of rabies” is monotonous, but with the mask off, interacting with others, his every intonation is as pungent as if he were biting into a metal file with every word. Travis Bickle’s got a rat-faced bastard for a cousin. As Ozymandias, Matthew Goode is a louche Xerox of a plutocrat, a haughty metrosexual enamored of singer David Sylvian’s early eighties posh, with plush intonations and plusher purple ties and fashion accessories. No Xerxes, he. (A single shot of his character entering Studio 54 to the admiring gaze of a phalanx of Village People look-alikes may be one of the stranger moments in a strange movie.) Malin Ackerman is terrible, hardly holding the screen, speaking in a perfected account of Cameron Diaz’s tones but without any of her dorky charm. Even when Ackerman’s stuffed into spandex, she comes off badly, as if she’d studied Demi Moore’s oeuvre and failed to meet those elevated standards. Her delivery of “Seems there’s things you’re not telling me these days, John” is almost laughable; “It’s all quantum physics and parallel universes with him!” would defeat far more experienced performers.

Of the many well-known pop songs used as ironic wallpaper, starting with Bob Dylan’s “The Times Are A’ Changing” under the extended credits sequence, and including Simon and Garfunkel’s “The Sounds of Silence,” and Leonard Cohen’s now-ubiquitous “Hallelujah,” the best comes at the very end. The melancholic ache and deep-creased bruise of Cohen’s worldview has a wit and grandeur that could inform a movie on similar subjects set in a similar time. “First We Take Manhattan,” popularized in the 1980s by Jennifer Warnes on the Cohen cover album “Famous Blue Raincoat,” plays in its six-minute or so entirety under the end credits and it is an alternative universe to this alternative universe that has always held a darkling hint of a never-to-be-made neon-noir doomed romance of outlaws and revolutionaries: “They sentenced me to twenty years of boredom / For trying to change the system from within / I’m coming now, I’m coming to reward them / First we take Manhattan, then we take Berlin/ I’m guided by a signal in the heavens/ I’m guided by this birthmark on my skin / I’m guided by the beauty of our weapons / First we take Manhattan, then we take Berlin…” That nonexistent movie would be a wonder: I can smell night’s summer rain on still-warm cobblestones from those words alone. Considering the well-publicized looting of Cohen’s savings by a dishonest manager, the portion of the surely substantial music rights budget that’s going to Cohen is a sweet gift to a good man.

“Watchmen” is now playing in 35mm and IMAX.