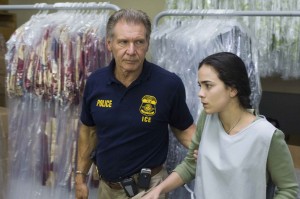 In most cities it’s no secret that just underneath the surface there is a society of people trying to stay invisible. They twine so perfectly into our daily lives that we hardly notice the impact. It’s odd to think that only nine little numbers can mean all the difference in a person’s life in the United States: a Social Security number, the difference between having endless options to taking what you can get. Writer-director Wayne Kramer (“The Cooler,” “Running Scared”) shows the many faces of immigrants in the U. S. today. Max Brogan (Harrison Ford) is a sympathetic immigration officer dealing with what most people think of when they think of Illegals-with-a-capital-I, a sea of faces scattering like frightened animals when the doors to a factory or sweatshop are thrown open. Max doesn’t seem to enjoy his job like some of his colleagues, speaking with detainees in their native tongue to show empathy. During one raid he reluctantly becomes involved in helping a woman reunite with her American-born son, taking him back and forth between the U.S. and Mexico on his time off. Ashley Judd plays a passionate human-rights lawyer with a Mother Teresa complex of sorts, hoping to adopt an African child from one of her cases. While her indifferent husband blackmails a beautiful aspiring actress from Australia (in the country on an expired holiday visa) into trading sex for a green card. There are other figures including a confused kid who thinks the only way he can find his roots is to join a neighborhood gang; a woman taking any job she can to raise her child; a family torn apart by strict laws and scare tactics hidden behind false pretenses of “security”; and another family that takes to violence by taking values from the old world that should of been left behind. All these scenarios merge neatly. While over-the-top at times, “Crossing Over” humanizes its huddled masses yearning to breathe free in a way they deserve. No one can control where they are born, the South African-born Kramer’s film demonstrates, a fact that’s so easy for people born in the Western world to overlook, that it isn’t our fault that we were born here, and them there. The resounding moral of the movie is that everyone should have a chance to make the best life for themselves and those they love, and even if you don’t agree with them being here, you should remember that almost all our families were originally immigrants, too. 114m. (Julie Gavlak)