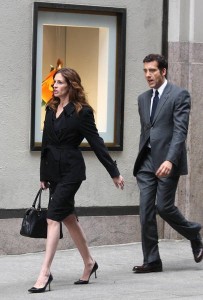 Writer-director Tony Gilroy—who scripted the “Bourne” trilogy—revisits the corporate white-collar environs of 2007’s “Michael Clayton” with a romantic caper starring ex-MI6 spy Ray (Clive Owen) and ex-CIA agent Claire (Julia Roberts). To score a fat early retirement package, they take security posts at competing corporations helmed by cunning CEOs played by Tom Wilkinson and Paul Giamatti. This fleet entertainment opens in a Dubai party where Ray hit on Claire, and Claire duped Ray. From there it’s five years later in New York City, two years ago in Rome, back to New York, eighteen months ago in London, and then off to the Bahamas by way of an industrial park in Georgia, next stop Miami, then three months ago in Cleveland, twelve hours later in Zurich, ten days earlier in New York and finally back in Zurich. Gilroy says he studied “The Thomas Crown Affair,” and there’s a similar play here with a duplicitous couple of pros who never know who’s playing whom. For Claire and Roy, intimacy is a matter of mutual espionage. They are keenly aware that neither plays fair. Love is encrypted. From “Michael Clayton,” Gilroy brings back his cinematographer, editor, composer and production designer, if not his critique of execs and their ethics. 125m. (Bill Stamets)