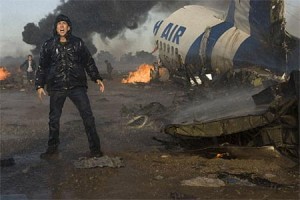 After cracking codes embedded in parchment locked in the National Archives and Library of Congress, Nicolas Cage now plays John Koestler, an M.I.T. astrophysicist who deciphers a page of numbers sealed in a time capsule. Lucinda (Lara Robinson), the weirdest kid at William Dawes Elementary School, penciled this string of digits in 1959 as a cacophony of voices echoed in her troubled little head. Turns out she was channeling instructions for her future granddaughter Abby (also played by Robinson). Koestler’s kid, Caleb (Chandler Canterbury), hears the same whispers and sees Whisper Men lurking in the shrubs. These black-coutured, bleach-blond, too-tall humanoids look like they could do security or bus dishes at a trendy late-nineties club in Helsinki or Hong Kong. And they look a lot like the aliens in “Dark City.” In both films director Alex Proyas calls them “Strangers.” The screenplay is by Ryne Douglas Pearson (whose “Mercury Rising” focussed on an autistic Chicago boy with a knack for numbers), Juliet Snowden & Stiles White. Koestler attempts to stop a terrorist attack in New York City, keep the mute strangers in drab sedans away from his son, mourn his late wife, reconcile with his father the pastor, and revise his anti-determinist doctrine on the random cosmos. “Knowing” goes where few films other than “A.I.” and “The Hitchiker’s Guide to the Galaxy” have gone before: imagine no more life on Earth as we know it. But Proyas lets us also imagine amazing friends from far away who will help us, or a select few of us, or maybe just two of us. Bold hits of special effects boost the paternalist spin on the ultimate afterlife. Ezekiel and Corinthians are invoked instead of the over-used Revelations. “Knowing” reveals the GPS address for a stairway to heaven, and transports Abby and Caleb to Eden 2.0, complete with a Tree of Knowledge. With Rose Byrne, Simon Duggan, Adrienne Pickering and D.G. Maloney. 121m. (Bill Stamets)