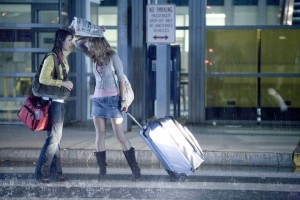 Fans of slasher films must supply the genre with fresh victims to cast. Avid viewers never take away tips on surviving these formulaic plots. There’s no pressure for slashers to evolve new bait-and-capture tactics since slashees are forever clueless at outfoxing slashers. As if natural selection is on pause. Two friends come back from a jaunt to Mexico. Mel (Peyton List) is queasy after deplaning. “At least you’re back on American soil where you can hurl without fear of getting your kidney stolen,” cracks Jules (Cameron Goodman), who sounds like she saw the South America-set “Turistas.” She’s the shorter, mouthy, flirty sidekick, and she is blonde. So she will die. Mel is a brunette. She does not die. It’s casting. It’s genetic. It’s generic. Jules notices Mel is missing something. “I thought you took off your engagement ring so street urchins wouldn’t chew your finger off,” cracks Jules. Neither has seen “Taken”—wherein two American teens make a big mistake at another terminal—so the two young women in “Shuttle” are unwary about ground transportation. Mel and Jules meet some guys at the baggage claim area. They all board the last van leaving the airport that rainy night. Four severed fingers later, worse than lost luggage occurs. Edward Anderson, who scripted “Flawless,” makes his debut as a writer-director shooting around Boston. If you’re curious about cash flow among dealers in live flesh, preferably shod in white heels, see if you can make sense of the handling of brick-sized packets of currency wrapped in brown plastic. 106m. (Bill Stamets)