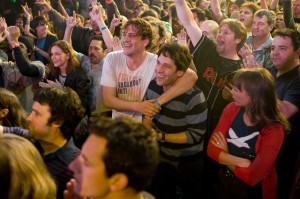 Paul Rudd is the eager, slightly dazed cocker spaniel at the bromantic heart of “I Love You, Man,” director John Hamburg’s burp-out-loud comedy. The cheery vulgarity starts from a baleful premise, the kind that exists only in the warped reflection of reality known as Movie Comedy World. Paul Klavan (Rudd), a realtor in pre-2009 Los Angeles, is engaged to marry his girlfriend, Zooey (Rashida Jones). They realize he doesn’t have a best man candidate, unless he were to have his gay brother (Andy Samberg) stand up for him. Why? He doesn’t have male friends. Enter: comic non-sexual “man dates.” And misunderstandings. And Rudd’s lovely unease. After a succession of silly complications, which includes Jon Favreau on the receiving end of a voluminous biological occurrence, Paul is holding an open house to sell a property owned by Lou Ferrigno. Enter Sydney Fife (Jason Segal, “Forgetting Sarah Marshall”), a Venice Beach slacker who becomes his great friend, the dude, the guy, the blunt-speaking, lady-tossing, oath-embracing big lout of a man. Segal has a gift for non-sequiturs, both verbal and facial, and their shared vulgarity is unabating (and in one extended bit about self-service, about masturbating), plus a nostalgic love of Rush. Bits dovetail nicely: the script is structured to a fault and to the very last shot, sometimes gratifying, sometimes worthy of eye-rolling. The real interest lies in how jokes are repeated and repeated, with mixed comic success. But in case of Rudd, it involves Peter’s verbal dribbling, a kind of compulsive word salad that goes far beyond the comedic “rule of three” into five, into seven, and more repetitions. (Think a slightly less brainy Albert Brooks who’s twice as clueless about the rest of society.) Here’s a charming maladroit who should not be left to his own devices with words even though he is a realtor. There’s something naked and deeply troubling in Rudd’s performance: this is an actor who has no shame and portrays a modern form of tongue-tiedness with grace, a grace suffused with all manner of mortifying clumsiness. Within a comedy of discomfort he creates a real human being, aggravating, vulnerable, true, in an agreeable whirligig of compulsive joking. (Ray Pride)