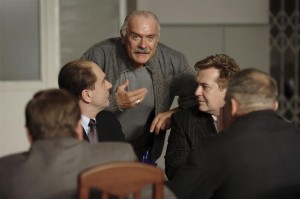 “12” shortens the title of “12 Angry Men” but lengthens the running time from ninety-six minutes to 159 minutes. Sidney Lumet’s 1957 original observed twelve Americans in a jury room reaching a unanimous vote on the guilt of a teen charged with stabbing his father to death. The black-and-white film includes only a few minutes at the beginning and the end set outside the jury room. Shooting in color, Russian filmmaker Nikita Mikhalkov frequently cuts from the jury to the cell of the Chechen teen charged with stabbing to death his stepfather, a retired Russian military officer. Mikhalkov also cuts to the lad’s hellish past in his wartorn homeland: the slaying of his father and mother, and his rescue by his future stepfather. The most striking difference in the two films is Mikhalkov’s decision to downplay the increasing skepticism of Lumet’s jury about the case made by the prosecution. Instead of increments of reasonable doubt, Mikhalkov shows a sway of consensus based on sympathy for the Chechen. Each juror takes his turn revealing a life-changing episode in his own life that persuades his peers to alter their initial knee-jerk vote. Through extravagant theatrics, each juror elicits pity that accrues to the accused. Some of these monologues are bravura psychodramas, and the Chechen flashbacks border on surreal excess. The carnivalesque “12” is a scattershot show trial on toxic incivility. Alcoholism, post-communist market forces, ethnic bias and anti-Semitism are among the ills on trial. In light of Mikhalkov’s longtime investment in Mother Russia and missing fathers as themes, here he adds the role of jury foreman to his earlier self-casting as a tsar. There’s an extra-legal fix for injustice after the last ballot, and a ploy of vigilante paternalism hatched on the courthouse steps leaves room for a sequel. With Apti Magamaev, Alexander Adashian, Yuri Stoyanov, Mikhail Efremov, Sergey Gazarov, Sergey Makovetsky, Sergey Garmash, Valentin Gaft, Alexey Petrenko, Alexey Gorbunov, Sergey Artsybashev and Victor Verzhbitsky. 159m. (Bill Stamets)