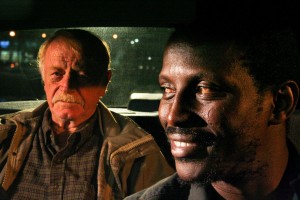 Raman Bahrani’s “Goodbye Solo” sounds like the setup for a student film or a revisit of “Collateral”: in Winston-Salem, North Carolina, a Senegalese cabdriver named Solo (Souléymane Sy Savané), working hard to make money for his family to subsist, picks up a fare, William (Red West), a rough 70-year-old white Southern loner. William proposes a ride to the nearby mountaintop of Blowing Rock in two weeks, where he intends to leap to his death. But Bahrani, as he’s proven in “Man Push Cart” and “Chop Shop,” works beyond cliché and archetype and shows a genuine drive to understand behavior in its intimate and momentary particulars. Solo befriends William, taking him on taxi rides, hanging out in bars, checking out women. Bahrani’s written that “ultimately Solo must find the courage and strength to love his new friend selflessly in order to help him do something seemingly horrible, or leave him to face it alone.” There is so much about friendship and loneliness and hope and despair in “Goodbye Solo,” from the very opening when the deal is proposed. The drama that develops between William and Solo-between West and Savané-is nothing short of astonishing. Bahrani observes these two men’s faces and suggests worlds-two small ones, two modest lives, filled with blood and heart and simply alive. It’s a thrill to see performances this accomplished and a film, shot by Michael Simmonds in fine, rough form that lives up to their work and the characters. Bahrani’s sense of both city and mountaintop is also uncommonly expert. 91m. (Ray Pride)