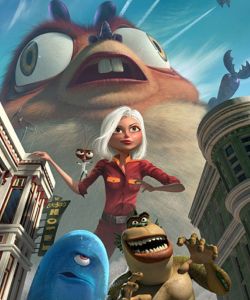 Four mutant earthlings forge bonds as they save the planet from a squid from deep space. This Gallaxhar (Rainn Wilson) seeks Quantonium, a rare element that will enable him to clone himself to dominate Earth. He got here in pursuit of a Quantonium-laden asteroid that hit Susan (Reese Witherspoon) on her wedding day. The stuff affects brides differently: instead of multiplying her, it just made her bigger. The U.S. government interred her in a secret, subterranean chamber and renamed her Ginormica. There she meets other detainees without due process: Dr. Cockroach (Hugh Laurie), The Missing Link (Will Arnett), B.O.B. (Seth Rogen) and 350-foot-tall mute winged grub called Insectosaurus. Kiefer Sutherland voices General W.R. Monger, who urges the president (Stephen Colbert) to deploy the monsters against the alien. Typical of the lax writing is that the General is not at all a warmonger: he never mobilized the monsters for the Cold War or the Global War on Terror. And Colbert gets better lines in the press kit than on screen: “To find a voice for The President, I tried to be just as declarative and as authoritative as I could without actually thinking about anything I was saying. The result: ‘Hollow certainty.'” In this animated family fare, the smartest humor comes from the one-eyed, orally fixated, gelatinous character without a brain. Although there’s a little wit about fifties sci-fi clichés, there’s nothing original about mocking a dim Modesto, California TV weatherman. Jeffrey Katzenberg, the CEO of DreamWorks Animation SKG, does not sound so bright himself when he says of the film’s 3-D effects: “the storyteller can actually bring the audience into the movie” and “we can actually deliver that third dimension.” In fact, the screen and glasses “actually” do not do what theater does. Rob Letterman and Conrad Vernon direct a screenplay by Maya Forbes & Wally Wolodarsky and Rob Letterman and Jonathan Aibel & Glenn Berger. 94m. Widescreen. (Bill Stamets)