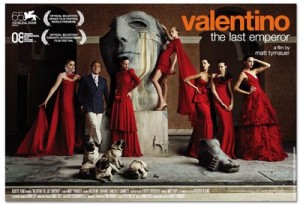 Like Cruella de Vil, the designer Valentino enters a room with a pack of dogs in his wake. Instead of Dalmatians, a half-dozen identical pugs surround him wherever he goes. He’s like a hound himself, attentive to every detail of what must be done to make his work so intricate. As we see in “Valentino: The Last Emperor,” every couture gown is sewn entirely by hand. We see a room packed with grannies hunched over pieces of fabric, sequins and thread that will be crafted into not just a dress but also a wearable piece of art. The fearsome head seamstress is more like an army general, barking orders. At one point Valentino wants to see a gown they are working on. In frustration, she unceremoniously snatches the gown from the mannequin, treating it as if it is a misbehaving child that needs to be dragged from a crowd. An employee runs after her with a look of sheer horror on his face as he gingerly picks up the train that is trailing across the floor. Waiting in the next room, a young model stands in nothing but a thong as Valentino and his inner circle make as little notice of her as one would a mannequin. The gown enters the room; the girl dresses, walks a few times back and forth across the floor, undresses then stands there again. This is the necessary, unseen, less-glamorous part of a designer’s routine. Work rather than dreams and glamour. As he walks across the park with longtime partner in business and in life Giancarlo Giammetti, Valentino explains about a dress he dreamed about the night before. Back at the office, he casually sketches the idea from his dream while explaining how he always knew he wanted to make clothes for women. His sister would take him to the cinema as a young boy and he would stare in awe at the stars on screen in their elaborate costume. More process: once the sketch is completed it’s sent to the seamstresses and it’s swept back for Valentino’s approval. The mannequin girl models, then the dress is wrapped up with the rest and sent off in an unmarked truck across Rome. Backstage at the fashion show you see young models running around as Valentino selects their order. Nothing seems to satisfy him. He finally descends into a child-like tantrum, saying, “People have to be on their knees in front of me!” These details make the film. Director Matt Tyrnauer had a lot of guts to get the footage, not just of Valentino, but of the fearsome grannies whose hands craft this “last emperor”‘s world. 96m. (Julie Gavlak)