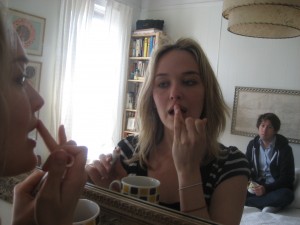 Come to think of it, every frame of every film asks, “What is cinema?” Some frames scream, others mutter, some stumble in literal and figurative darkness. Then there are filmmakers like Carlos Reygadas, whose stubborn, implacable, sublime spiritual tale “Silent Light” has emerged from distribution backwaters to limited theatrical exhibition (it opened Friday at Facets). I’m happily surprised it’s finally playing here.

Last week, I observed a masterclass at the Thessaloniki International Documentary Festival by Vilmos Zsigmond, whose philosophy as cinematographer boils down to storytelling as lighting, as seen in paintings and stills. Composition, he confidently stated, is secondary, since there is only ever one proper place to put the camera.

And another kind of frame: earlier this month at Austin’s South by Southwest (SXSW) Festival, productive Chicago filmmaker Joe Swanberg (five features, overlapping Web series) premiered his latest, “Alexander The Last,” an elliptical, seventy-one-minute story about a romantic triangle involving two sisters. Since his first feature, “Kissing on the Mouth,” there’s been a provisional, unfinished character to his work, as if he were discovering both what stories to tell and how to tell them as he went along, not “re-inventing cinema,” to be sure, but working with an attitude and an ambition that might find a voice. In “Alexander,” co-produced by Noah Baumbach, and using professional actors for the first time, there’s solid evidence of growth, and room for more. But is it film, filmmaking, how we define things in this moment? In a long conversation that made for a Newcity cover story at the release of his earlier “Hannah Takes The Stairs,” I was struck by his observation that he’s not framing for the big screen, the laptop frame or 16×9 for a sixty-four-inch plasma screen. His ideal image, he confessed, is the contours of the flip-out screen of his video camera, maybe two inches by three inches.

Swanberg’s work caught the eye of a vitriolic commenter at the Web site Hollywood-elsewhere.com, after praise from its curmudgeon proprietor Jeffrey Wells. “I don’t care if you DV’ers use the term ‘film’ as a catch-all to describe your VIDEOS, because they are NOT films… Choosing to bend the definition in order to suit your needs is desperate attempt at legitimizing a medium…The secret is out, kids. Your experiential, slice-of-life tales are not artful in any sense of the word. Your movies are largely plotless because you are simply not creative and/or smart enough to develop any.” Is the poster cineaste or Luddite? Carrier of Diogenes’ lantern or Brute with a freshly sharpened knife?

In the Greek masterclass, Zsigmond actually exulted in the possibilities of digital projection, but more so in the tools that digital technology affords him as a cameraman. The ideal form, he says, is to shoot on film, transfer to digital for all sorts of postproduction and return to film for exhibition. Zsigmond described his workflow for over ten minutes, which includes test stills shot digitally that he will then mess with in Photoshop until he can show the lab what he’ll want to do with the Digital Intermediate. The final version will be on 35mm, but is it still “film”?

But on to Reygadas. Like his earlier films “Japon” and “Battle in Heaven,” the third feature by the eagerly provocative trained diplomat aims high, into the sky, to be sure, into the heavens. The opening shot of his story of a fraught romantic triangle inside a community of Mennonites in Chihuahua in northern Mexico, using non-actors and made in the obscure, near-defunct Plautdietsch tongue, announces: This Is Film. The shot is a glorious six-minute sunrise that encompasses the stars, a smoky sky before dawn, the suffering low of animals and the momentary absence of man. The image appears to elongate, reality distends: the image suggests you are seeing neither the past nor the future but an eternal present. Man. God. Stars. Cows, lowing cattle. What metaphysical musing inspired this finite yet boundless universe of desire, transgression and transformation? A screensaver. “I had everything apart from the opening and closing scenes, I was listening to Sigur Rós before going to bed, the computer was in front of me, and the screensaver came on. I have this cosmic screensaver, a picture of stars moving out of the frame very, very slowly. I looked at that magnificent space landscape with the music of Sigur Rós playing and I thought the movie had to open like that.” Reygadas engages what’s in front of him: song, nature, a swirling pattern of pixels. There is a sustained passage near the end of the film that not entirely successfully communes with the key scene in Carl-Theodor Dreyer’s transcendent “Ordet,” but his unalloyed conviction, his quest for something elevated, carries the film to its circular conclusion. Everything else is technology. A tool. There is only one ideal composition.