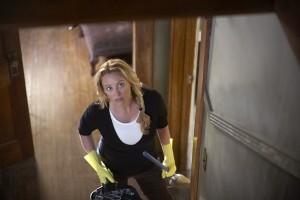 “It’s got a bit of history,” understates the real estate agent who rents Sara (Virginia Madsen) a house in Connecticut. He doesn’t dwell on code violations like the dumbwaiter shaft that doubles as a chimney for the furnace in the basement. As for the insulation? Don’t ask. Sara needs a place near the hospital where her teenage son is undergoing experimental cancer treatment. “The doctor will drop me from the trials if I see things,” reveals Matt (Kyle Gallner), who is reluctant to reveal that he saw his mother mopping the kitchen floor with blood or a boy with a fire-blackened face who taught him a morbid rhyme. Writers Adam Simon (writer-director of “The American Nightmare,” a fine documentary on the horror genre) and Tim Metcalfe (co-credited with the story for “Kalifornia”) open this effective ghost tale with “Based on the true story,” a variant on the usual “Based on a true story.” There’s more than one story about the house on 208 Meriden Avenue in Southington, Connecticut. Built in 1916, this Colonial Revival residence had a half-century career as a funeral home before launching a cottage industry of haunted house books and TV shows, including “I Was Raped by a Ghost” on The Sally Jesse Raphael Show. “The Haunting in Connecticut” opens with Sara, badly lit, sitting for a documentary interview. Instead of clippings from The Bristol Press and other local papers, the film shows Matt and his cousin Wendy (Amanda Crew) visiting the local library and unearthing old newspaper stories about ectoplasm and coffins weighted down with sand bags. This backstory furnishes the most inventive narrative. As anyone who’s seen two or three films like this knows, a frightful apparition is seconds away whenever a character moves the door of a bedroom closet or a bathroom cabinet that has a mirror. Yeah, I know. I still screamed two or three times. Director Peter Cornwell’s worst move is overdone audio design that commingles sound effects and creepy music to spook his audience, with all the creaks, groans, clatters, drafts, slams and footfalls in the old house that creep out its inhabitants. Pray for a prequel, or at least a DVD extra documenting “the true story” of the original renters and their dealings with the film’s producers. With Martin Donovan, Elias Koteas, Erik Berg and John Bluethner. 92m. (Bill Stamets)