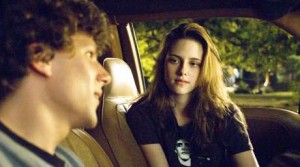 Oberlin grad James (Jesse Eisenberg from “The Education of Charlie Banks,” “The Squid and the Whale”) must spend his summer working at an amusement park. Nix that trip to Europeland. It’s 1987 and family finances took a hit. Affording grad school at Columbia University in the fall is iffy. Adventureland is run by an odd couple, played in pitch-perfect supporting roles by Kristen Wiig and Bill Hader, both from SNL and “Knocked Up.” It’s a shit job, but James likes his co-workers. Especially Em (Kristen Stewart, “Panic Room,” “Twilight.”) Writer-director Greg Mottola (“Superbad,” “The Daytrippers”) may overdo her issues with an awful stepmom and an unhealthy affair with a co-worker (Ryan Reynolds) who impresses high school girls by claiming he once jammed with Lou Reed, but he puts together a terrific couple in Em and James. This coming-of-ager includes a juvenile bit about repetitive groin injury yet downplays James’ virginity with something like maturity. An anomaly in American comedy, in the last reel a character makes an account of acts of another character, and judges the character of that character. Mottola sneaks in welcome traces of decency in between cracks about Semiotics and barfed corndogs. With Martin Storr, Wendie Malick, Jack Gilpin, Matt Bush. 105m. (Bill Stamets)