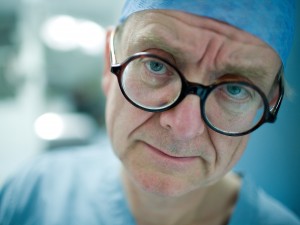 Geoffrey Smith’s thrilling, tonic “The English Surgeon” follows Henry Marsh, a doctor with a decade-plus humanitarian history of visiting Ukraine for several days at a time to perform brain surgery with whatever means at hand. Marsh, with large owlish glasses and a stubborn steady stare, remains cool-tempered and inventive in every circumstance, a wizard, like Harry Potter grown wise and gray. (A scene in which he discusses a fatal diagnosis in front of a patient who knows no English is simple, direct and stunning.)

Beautifully structured and edited, with an effective score by Nick Cave and Warren Ellis, this tremendously moving film’s extremes include a surgery that has to take place while the patient’s awake, a horrifying and horrifyingly funny sequence that we see from the perspective of both patient and doctor. Marsh is steely when reflective: “When push comes to shove, we can afford to lose an arm or a leg, but I am operating on people’s thoughts and feelings. And if something goes wrong I can destroy that person’s character… forever.”

“The film is really about one man’s struggle to do good things in a flawed and selfish world. It’s a moral fable, right?” Smith said to me when we talked after its premiere at Hot Docs 2008 in Toronto. With figures that range from generous neighbors, to church folk who raise money to get a stricken woman to Kiev for treatment, says Smith, “right through to Henry Marsh, who’s coming from another country to try to save lives. That whole web of connection [works] at all levels. And I simply want people to see it for what it is, a series of links, a series of kind-hearted people who are doing [good] for no particular reason other than the humanity. It’s so clichéd to speak like that. It’s so cliché to end a film with the words ‘What are we if we don’t help others? We’re nothing, nothing at all.’ If you hadn’t been on the journey to that point, you could write it off as being sentimental. But actually, there’s not a trace of sentimentality in there. Because it never lets you up, [my film] never indulges in sentiment. You go from one good thing, to humor, then straight back to absolute tragedy. Whenever we get too comfortable, [things] come crashing back down again. There’s the grandmother who loses her granddaughter, there’s the little girl who’s blind, and of course, there’s the girl at the end who’s 23, who’s going to be dead in two years time. [The film] is simply a reflection of the world out there. That was my only model, a mix of farce and humor and tragedy and then start up again. Hope mingling all the way through. That’s what was important to hold onto, because I knew that was real.”

Smith met Marsh about five years ago. “I’d been asked to do a series of films about surgeons for the BBC, and I said to the guy, to the commissioning editor, ‘Who’s the most intersecting, forget the cutting-edge stuff, just who’s the most interesting human?’ And he said, ‘Without a doubt, Henry Marsh.’ Henry lived in London. I went down there, and honestly, within half an hour, it was one of those absolute meetings of minds. I said to myself, ‘This man is more of an artist, a Renaissance character first and foremost, then, he happens to be a brain surgeon.’ That is important because he brings that questioning, vulnerable, truthful approach to all the things he does, which is a science, but an art and craft at the same time. He brings all sorts of interesting skills, and he carries this enormous responsibility very, very much on his shoulders. I was so intrigued.”

Other discoveries were shortly to be made. “And then, over some vodka, we discovered, both of us, bizarrely, had this love affair with this forsaken place called Ukraine. Not many people even know where it is, let alone have been out there. I’d been going out for ten years; he’d been going out fourteen or so. So I went out there with him on his next flying visit. I’d always wanted to make a film about Ukraine. It’s a place that means a great deal to me. It’s got soul and farce and tragedy and humor, all mixed up together. And within half an hour of being there, with Igor [the patient who must remain awake during surgery], in that room, I just knew I had my film. Just absolutely crystal clear. There’s drama, there’s life and there’s pathos. And there’s hope. And there’s dashed hope. And redeemed hope. All just literally coming out of the pores of the place. I started to raise the money and went about making it. It’s one of those great moments in life where you know you’ve been given a charge and a mission. And you just need some support to do it.”

“The English Surgeon” opens Friday at Facets. Part of the interview is here and here.