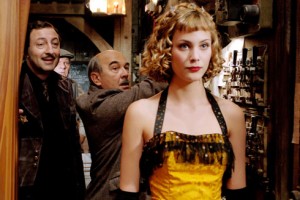 For his 2004 debut “Les Choristes,” French writer-director Christophe Barratier used a long flashback to frame a sentimental tale of a choral teacher played by Gérard Jugnot, who inspired a school boy to go on to renown as an orchestra conductor. Barratier adopts the same device to frame an interrogation of a murderer in “Paris 36.” This recalls Jean Renoir’s “Le Crime de Monsieur Lange” from 1935, where a long flashback sets up another murder also committed in the political clime and pop culture of the Popular Front. Barratier again casts Jugnot—starring here in the role of Pigoil the stage manager—for another valentine to music. Taking the place of a boarding school in the countryside in “Les Choristes” is The Chansonia, a music hall located in a Paris neighborhood named Faubourg. Pigoil and his comrades in song fight a dastardly Fascist crook so the show can go on. And so Pigoil can regain custody of his accordion-playing son JoJo (Maxence Perrin), destined for a musical career. “Paris 36” doubles its two-generation theme with a mother and daughter, singers on stage and the radio with separation issues of their own. Frank Thomas and Reinhardt Wagner sweetly recreate the Paris of 1936 with their original music and songs. Barratier lavishes such affection on this fluff that his élan almost suffices. Endearing, adorable pastry. With Nora Arnezeder, Clovis Cornilla, Kad Merad, Pierre Richard, Bernard-Pierre Donnadieu. 121m. (Bill Stamets)