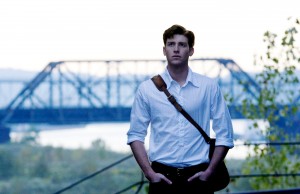 Another one of those summers after college that changes-life-forever, rather like that summer after high school that did likewise. Too often these films sport narrators that no screenwriter ever interrupts. In this one, Art Bechstein (Jon Foster) is a cum laude economics major who takes a job at Book Barn. This summer-long employment is a masochistic reflex against the world of work he is primed to detest, as we know from his extensive voiceover work. Evenings are devoted to a class to prep him for a stock broker’s license so he can work on Wall Street, far away from his crook dad (Nick Nolte) in Pittsburgh. But then bland Art, who feels at home in Brooks Bros. buttoned-down shirts, strays from his career path with two new pals: hot blond violinist Jane Bellweather (Sienna Miller) and her hot brunette boyfriend Cleveland (Peter Sarsgaard). This trio makes for more than one hot couple, due to a bit of bisexuality. It’s a non-credit elective for Art, who’s on his way to flunking his other course this summer. Rawson Marshall Thurber (“Dodgeball: A True Underdog Story”) directs his adaptation of Michael Chabon’s 1988 novel with a fine eye for Pittsburgh locations. White smoke rising from a rusty smokestack in a relic of a steel mill supplies one of the mysteries in the title. But the sexual sparks forged between the threesome are no less motivated by forces of id or industry. With Omid Abtahi, Mena Suvari and Marc Macaulay. 95m. (Bill Stamets)