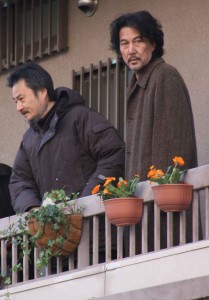 Kiyoshi Kurosawa’s cinema of dread and unease is among the most consistent and idiosyncratic of the past decade or so, wreaking fantastic fear in movies like “Cure” (1997), in which an imprisoned serial killer induces others to murder for him and “Charisma” (1999), in which the titular tree may or may not be able to destroy the world. (His “Pulse” (2000) was remade in the U.S.) With “Tokyo Sonata,” Kurosawa works as well in a domestic setting as within horror trappings. Sasaki (Teruyuki Kagawa), a Japanese salaryman, finds himself unemployed during economic downturn but dresses for the office each day, lying to his family about his sudden loss of income (and his sense of self and his masculinity as well). Things take a turn for the strange when a home invader (Kurosawa stalwart Kôji Yakusho) kidnaps Sasaki’s wife; the eruption in the stately narrative is odd but welcome. Kyoko Koizumi has piercing moments as the put-upon mom. Kurosawa’s look at the furies of denial in the face of chaotic times is, unfortunately, shockingly relevant in this moment. 119m. (Ray Pride)