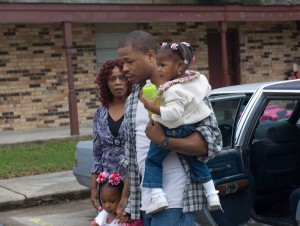 “Hearing the story made me start to cry,” states writer-producer Bill Haney. “I hate bullies.” An NPR story about a small town Texas drug sweep inspired this effective fact-based drama wherein a black single mother of four, and her lawyers, take on white law enforcers. Haney and director Tim Disney do not try to make you cry, to their credit. But their agenda pushes other buttons. In the end, “American Violet” affirms a legal system that starts out ruining the lives of poor Texans. In the wrong hands, Texas-style justice is racist. In the right hands, it can leverage racism to vilify false accusers and redeem the innocent. With an assist from the ACLU, the truth indeed sets you free. The performances are strong and Disney makes it easy to back the underdog good guys. Nice shooting lets you overlook lapses into movie-of-the-week music. The facile climax, though, turns on a gotcha ploy outing a district attorney for saying “nigger.” With Nicole Beharie, Tim Blake Nelson, Will Patton, Michael O’Keefe, Xzibit, Malcolm Barrett, Charles S. Dutton and Alfre Woodard. 120m. Widescreen. (Bill Stamets)