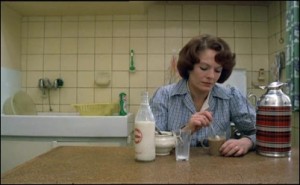 Chantal Akerman’s made diverse and worthy projects over the course of a four-decade career, but her reputation may rest with the long-unseen “Jeanne Dielman, 23 Quai du commerce, 1080 Bruxelles.” The Handkean chilliness of 1978’s “Les rendez-vous d’Anna” is memorable, and there are moments in her 1982 rehearsal-for-a-musical “Toute une nuit” and in finished form, “Les années 80” (1983) that hold moments as indelible as any latter-day elaboration of the form of the movie musical, ranging from Rivette’s “Up Down Fragile” to “Punch-Drunk Love.”

But the unholy grail: There’s a critic who says he has forty minutes of it on his iPod, as well as the entirety of “The Mother and the Whore,” but whatever arcane bragging rights that feat offers, a postage-stamp frame of Akerman’s deliberation, maximally minimalist telling is not the same as enduring its three-plus hours on a large screen. The now-58-year-old director was all of 25 when she considered telling the events, the quotidian banality of one single mother’s life, and how daily repetition might lead not to enlightenment but to madness. Delphine Seyrig’s performance is enhanced, as Manny Farber noted in a splendid appreciation, by cinematographer Babette Mangolte’s choice of lenses “to suggest the entirety of Seyrig inside each frame.” A “tradition-bound treadmill whose back-forth, up-down existence is the phenomenological stuff of this move, what other movies leave out”… “second-by-second tragedy” of “bold, electric frontality”? I could think of only one better way to put it: to put yourself in front of it at Siskel this week. Then read Farber on “Jeanne Dielman” in his essential collection, “Negative Space.” 201m. (Ray Pride)

“Jeanne Dielman, 23 Quai du commerce, 1080 Bruxelles” opens Friday for a week at Siskel; long available only in 16mm, a new English-subtitled 35mm print will be shown.