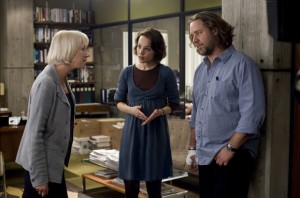 Reporter thriller “State of Play” lines up a full roster of the usual players for an entertaining tutorial on D.C. insiders, mercenary corporations and marital deceit. Toss in two junkies cruising Starbucks for briefcases and laptops to boost for ransom, and one freelance black-ops patriot with a father-figure issue. The key players, though, are chasing the scoop on a zesty conspiracy. Tubby Cal McCaffrey (Russell Crowe) is an old-school street reporter who treats cops to coffee at crime scenes. Della Frye (Rachel McAdams) is his paper’s twenty-ish blogger on the “personal relationships in the political sphere” beat. And Helen Mirren plays their crusty editor at The Washington Globe (The Washington Post gets a “Special Thanks” in the credits) that’s jerked around by new owners. Newspaper readers and fans of the newsie genre will like this Della n’ Cal exchange: “Did we just break the law?” – “Nope, that’s what you call damn fine reporting.” Professional ethics is the inelegant glue bonding various plot lines. Cal is pals with Kuwait vet and U.S. Congressman Stephen Collins (Ben Affleck) who is holding oversight hearings on the Hill to investigate a private military contractor called PointCorp, which is rather like Starkwood in this season’s Fox TV series “24,” which is sort of like Blackwater Worldwide in the real world. PointCorp seeks $40 billion in contracts to privatize Homeland Security. But the chief investigator in the Congressman’s office is also his secret lover, and her suicide-by-subway triggers suspicions at the Globe. Cal was once the secret lover of the wife (Robin Wright Penn) of his college roommate and best friend, the Congressman. Jason Bateman and Jeff Daniels get tasty turns as a pervy PR consultant and the oily Majority Whip, respectively. Conflicts of interest get bloody. Screenwriters Matthew Michael Carnahan, Tony Gilroy and Billy Ray adapt the six-episode 2003 BBC miniseries “State of Play” that Kevin Macdonald (“The Last King of Scotland,” “One Day in September,” “Touching the Void”) directs here at a smart, keen pace. Dumb stuff: a key clue is coded in black tee-shirts with a telltale insignia, and an impromptu sermon by Cal about America’s trust in newspapers as truth tellers that are crucial to our way of life. Films like this may disseminate more news-like truth about Congress and corporations than the real things do with ink and paper and with declining readership and ad revenue. 118m. Widescreen. (Bill Stamets)

[…] suspicion. For these reasons the company has managed to be caricatured in several Hollywood films and television shows, it has been the subject of a hard rock song, earned a mention on late night […]