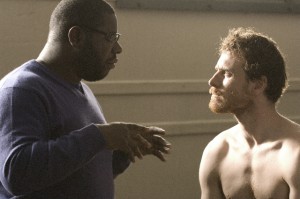 “I want this movie to be like a smell.”

That’s not the usual sentiment you’d find from a careerist filmmaker, someone intent on making one movie after the other on an increasingly larger scale. But it is one voiced by Turner Prize-winning English visual artist Steve McQueen [left] who offered that insight into one of his early, prize-winning installation efforts, and it could also be said about his serene, unruffled debut as a feature director, “Hunger,” about nothing less than life and death in Belfast, Ireland’s Maze Prison during a sixty-six-day hunger strike in 1981. The Republican inmates refuse to eat until the British government recognizes the IRA as a legitimate political organization. The Blanket and No-Wash protest begins: the men refuse uniforms and live in their filth. A voice of authority sounds in the prison corridors: a disembodied Margaret Thatcher. All else is refined, reduced eventually to what goes on inside prison walls, against soiled cell walls, inside the confines of an expiring mind.

Movies got confused in their first century. They forgot what they were (or are). Cinema started as an extension of photography, that curiosity of curiosities, that capture of observation and witness in apparent real time. Think of the Lumière brothers’ short films, often a single take like “Train Entering a Station”(L’Arrivée d’un train en Gare de la Ciotat, 1895). This is the world dreamt for us. In reflected light, we see what we’ve seen as seen by someone else but seen as if in a dream. Movies with a thirst for light and enlightenment in recent decades have largely become something else, tethered to scripts and schedules and release patterns and money that must be made back in a reasonable amount of time to satisfy stakeholder and taxman alike, bearing plotlines with only the slimmest of variations between them.

Many moviegoers might well find “Hunger” unendurable. Yet it has the scent of that nearly lost curiosity, a thirst for time’s passage, for the stink of life, the punishing truth of duration. It’s a more elegiac endeavor than Chantal Akerman’s rarely seen “Jeanne Dielman,” which works through accumulation across three hours and a burst of ultimately irrational behavior to capture something of life’s rhythms in fresh, uncommon, revealing fashion.

“Hunger” is studied, and filled with limpid, lyrical images, of feathers and snowflakes and cigarette smoke and a crying policeman, of men smoking pages of the Gospels, but also blunt depiction of what the “dirty protest” of the men actually entailed, with cell walls daubed with waste, corridors running with fluids. Think of Terence Davies’ stern lyricism in the transfixing movement of camera and light in “Distant Voices, Still Lives” (1988) and “The Long Day Closes” (1992). McQueen’s earlier video installations and other non-narrative forms have been described as both tender and tactile. Throughout his career, critics have described his work as bodily exploration, as forensic as it is dramatic, as bacterial as it is spiritual. Consider it corporeal punishment. Contemporary parallels are unavoidable and unfortunate. As McQueen’s written, “The body as site of political warfare is becoming a more familiar phenomenon. It is the final act of desperation; your own body is your last resource for protest. One uses what one has, rightly or wrongly.”

The structure of “Hunger,” written by Irish playwright Enda Walsh, is essentially a triptych. A nearly wordless opening passage of the quotidian of prison life, including the travails of one of the guards, is followed by a second that reduces its dramatis personae to a single protagonist, Bobby Sands (Michael Fassbender), who would become first of the ten strikers to die. This stretch is an extended conversation between Sands and a priest that consists of moral and political argument. Shot on film, it’s an exceptionally long scene, thrilling in its concentration, that required special film stock to run the camera its almost twenty minute duration.

Fassbender commits himself to the body and the out-of-body, in the latter scenes starved into the figure of Sands, crumpled even more than Christian Bale was in similar sacrifice in “The Machinist”(2004). McQueen’s portrayal of the bruised male form brings to mind the great painter Francis Bacon’s bodies of men in extremis, bruised, torn, vividly corporeal. Sympathy? No. Pity? No. Empathy. Dignity and the human form are fragile and both necessary to sustain life. And patience: which the harrowingly beautiful, tragic, even transcendent “Hunger” has in abundance. In the end, “Hunger” makes concessions to traditional form with a lovely, if familiar image of release, of souls in flight. It is a gesture of forgiveness. To paraphrase another voice from that long ago late twentieth-century era, the Sex Pistols, McQueen, he’s a human being. Now maybe some salami and cheese, some crackers. Yes. That would be good.