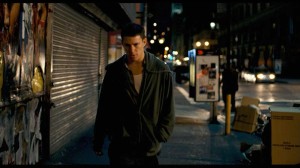 The most subversive thing to do in the studio system farm teams is to make a good movie.

With his second feature, “Fighting,” writer-director Dito Montiel is a subversive. Jesus, what a scrappy in-your-face, in-your-lap uncontrollable B-movie puppy dog he’s made with “Fighting,” a lovable, scrappy scamp, bold pastiche that romanticizes mean streets and meaner breaks. His first feature, based on his 2003 memoir of growing up on the streets of Astoria, “A Guide To Recognizing Your Saints” (2006), was visually expressive, a bit arty and precious, but accomplished for a debut. But finding one’s voice in other filmmaking grammars? That shows talent to watch out for.

Shawn (Channing Tatum) is a knucklehead with a neat, short haircut. He’s got a backstory you could put inside the cover of a matchbook. Selling counterfeit goods among the vendors across from Radio City Music Hall, he gets into a turf fight and punches his way into making the acquaintance, or clutches, of Harvey (Terrence Howard), a second-rate street hustler, always “business ready for a business” with a blocky briefcase in hand. His history extends to an ex-confederate, now bitter rival played by Luis Guzmán. In the mix is Zulay (Zulay Henao), a waitress at a West Chelsea nightclub that Shawn takes a liking to; she figures neatly into the plot. (Zulay’s abuela, played by Altagracia Guzman from “Raising Victor Vargas,” has several peerless comic scenes as she pushily protects her granddaughter’s virtue.)

Here’s a litany of likely influences on Montiel’s lovely lumpen-droll Cinderella tale: Robert Rossen and Abraham Polonsky’s boxing-and-ethics  “Body & Soul” (1949); Walter Hill’s epigrammatic bare-fist boxing “Hard Times” (1975) as well as his Manhattan-as-battlefield “The Warriors” (1980); “Midnight Cowboy” (1970), with its eccentric relationship between two uprooted, uncentered men as well as its fabulous side characters; Scorsese and Spike Lee’s oft-fetishistic New York City location work; Abel Ferrara’s dank grime; and simply the teeming, peopled street life of Manhattan by night and day, captured in grain, bruise, verdigris. Montiel likes aerial shots of the city with bombastic music. Under the main titles, there are helicopter shots of the city at dusk, and at the very last, Montiel plants one on Manhattan, positioning his director’s credit smack between Momma Chrysler and Daddy Empire.

The credits are auspicious: cinematographer Steven Czapsky’s shot “The Thin Blue Line” and “Ed Wood”; production designer Therèsé DePrez’s work includes “High Fidelity,” “Swoon,” “I Shot Andy Warhol” and “Summer of Sam.” Chicago-born co-writer Robert Munic made a likeable micro-indie, the airy-banter-filled “The Pros and Cons of Breathing,” in 1994. And the result is gratifying, terrific termite tale-telling on detailed turf, with scenes that seethe and jangle, as restless as a hood’s left leg after a couple of cappuccinos and a Red Bull. The dialogue waffles and flakes, with epigrams like in Hill’s for Strother Martin in “Hard Times,” which included, “One day a black cloud appeared on campus and I left under it.” “We’re in a $100,000 Mercedes, that’s where we are,” Howard says in his zoned, nasal intonation. The dialogue gets the hesitations and artfully arrayed banalities of inarticulacy. “Smells like boxing ass in here.” “Don’t smile at nobody.” Listen to the way Howard breaks up the words, “I’m from a place with culture. Chicago. I’m sure you got your own story” and there is a “my fault” throwaway before the second fight that’s as astutely delivered and placed as in theater. (That bout efficiently suggests the adversaries like Romans, standing above the space on backstairs, a Queens alley turned momentarily into gladiatorial arena.)

Czapsky and DePrez detail every frame, but it’s the actors’ gestures and intonations that make “Fighting” so wildly entertaining. Early on, there’s a shot of Howard through a diner window, daintily holding a quarter of a biscuit between thumb and forefinger and applying Tabasco. (And there’s a grace note of a throwaway line about the biscuits to come.) When Shawn and Harvey first meet and are walking, the close-up on Shawn eddies in and out of focus. Perfection. Crappy sound mix of dialogue when four characters are in a car, focusing on them and not the “room tone” of the “space”: expressively off. The fisticuffs have their own energy, the sound of blows landing with a splat-crack and krakSPLAT.

A secret office in a tchotch-shop back room is behind a door adorned with a beach towel in the shape of a $100 bill. A backdrop to the gangster’s desk is a black-and-white drawing from the perspective of lower Manhattan, the World Trade Center still standing bold and stark. The climactic fight takes place approximately where the character’s head is against the piece of art. That coming-to-blows in front of a crowd of venal rich plays out on a roof terrace overlooking the financial district, where several characters walked past Merrill Lynch’s iconic bull statue moments earlier, and Montiel makes his helicopter shot motif pay off as more than filler: coming from blocks away, the top of the building is lit golden, gleaming like a blazing scarab perched atop the city. There’s a lot more expressiveness like this: the slightest aside pays off in Montiel’s gleeful, lyrical imagination.