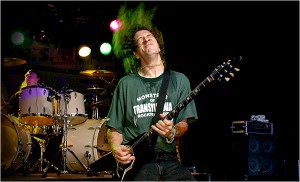 As much as I get itchy during movies by Christopher Guest, I am endlessly entertained by documentaries that are fully factual but have subject matter and characters that suggest a mutation of his improvisational wickedness. “Anvil! The Story of Anvil,” a documentary about three decades in the life of a “Spinal Tap”-like heavy metal band that even has a drummer named “Robb Reiner” (Rob Reiner directed “Tap”), was made by screenwriter Sacha Gervasi (“The Terminal,” “The Big Tease”), who just happened to have been a roadie for the band when he was a teenager. “Anvil!” is almost too true to be good, but when it’s good, it’s very, very good. After its debut at Sundance 2008, there were several studio-indie people who kept asking all and sundry, what did you think? What did you think? They were wild for it but couldn’t get their bosses to bite. (The bosses in question no longer have those jobs). Funny and stirring without ever truly mocking the long-held ambitions and musical mediocrity of Torontonians Steve “Lips” Kudlow and drummer Reiner, “Anvil!” is a portrait of obstinacy, determination, identity, stupidity and ultimately, unexpected delight. Of their fistful of fans that never grows, Reiner is unintentionally hilarious and heartbreaking when he says, “I can sum it up for you in three words. We have shit management.” Gervasi’s a bright and trenchant onlooker, knowing when to let well enough be, including when Reiner invokes what became of family members at Auschwitz. It’s one of 2009’s best releases to date. 90m. (Ray Pride)