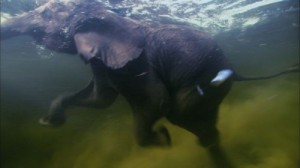 Rated G, “Earth” gets a grade of D for underachieving in the genre of nature movies. Whether indoctrinated with creationist cant or by green propaganda, kids will learn little about the title planet, its seasons or its creatures from Leslie Megahey’s script narrated by James Earl Jones. This premiere production from the Disney nature label tracks three moms and their offsping, so moms in the audience can identify with their elephant, polar bear and humpback whale counterparts on the screen. There’s nothing to upset treehuggers or treehaters, not even the non-denominational invocations of our Paradise. George Fenton, who scored “Planet Earth” episodes in 2006, composes colorless music. The rest of the soundtrack lacks acoustic detail about the habitats and their inhabitants. I liked seeing demoiselle cranes from Mongolia soar over Himalayan peaks; Birds of Paradise from Papua, New Guinea strut their stuff; and mincing Chacma baboons forge the Okavango Delta in the Kalahari. Non-meat-eaters take note: there’s no assurance from the American Humane Association that “no animals were harmed” in “Earth” since none of that Denver-based group’s Certified Animal Safety Representatives accompanied camera crews shooting forty two animal species over five years. When a wolf and a cheetah make their kills, on their respective continents, directors Alastair Fothergill and Mark Linfield cut before a bite draws any blood. 89m. (Bill Stamets)